It all comes down to this. In it’s 60th anniversary year, the Prestone MSA British Rally Championship title fight will be decided on one of rallying’s greatest challenges – Dayinsure Wales Rally GB. With two sets of championship points on offer for the double-header, a battle royale is set to rage throughout the famous Welsh forests and four days separate the crews and their quest for glory.

Four crews will arrive in Wales with a mathematical chance of clinching Britain’s premier rallying series. The star of the show will undoubtedly be home-grown hero Matt Edwards and co-driver Darren Garrod.  The Ford Fiesta R5 crew have dominated to date and are within touching distance of their first BRC title. The Welsh duo are also going for a clean sweep of BRC victories – which would be the first time the feat has been achieved since the late, great Colin McRae in 1992.

Despite rolling out of the first round on the Pirelli International Rally, David Bogie and John Rowan have kept themselves in the hunt with podiums on the Tarmac of Belgium and Northern Ireland. 2011 Champion Bogie has a new Skoda Fabia R5 for this event and will have to outscore Edwards on both rounds to have a chance of lifting the trophy once again.

Edwards’ M-Sport team-mates Alex Laffey and Patrick Walsh and Bogie’s stable mates Rhys Yates and Elliott Edmondson have a mathematical chance of top honours but will need Edwards to come into trouble on both legs of the event.

Ice cool Laffey has progressed with every event, claiming a career-best on gravel on the Pirelli Rally before taking his best BRC result to date with fourth in Ypres and on the Ulster. The young Scot will be pushing hard on his less preferred surface as his first objective will be to notch up his first ever BRC podium.

Rhys Yates on the other hand comes to the Showdown with the most to gain and little to lose and will be solely focused on two outright wins this weekend.  The Skoda Fabia R5 driver has come close on several occasions this year and will throw caution to the wind as he hopes to become a first time winner in the Diamond year of the BRC.

The young upcoming drivers in the Junior BRC are vying for one of the most coveted prizes in British motorsport – a test with the Hyundai Motorsport team in the latest i20 R5 machine.

Steve Røkland has established himself as one of the best R2 drivers in Europe and has shown his star quality with wins on the gravel and Tarmac this year. The Peugeot 208 driver is in the pound seat ahead of the Welsh classic with his rivals having it all to do in the forests this weekend.

Welshman James Williams won in Ypres and will be eager to perform on home soil in his Vauxhall ADAM R2. Williams will need two victories and Røkland two thirds or less to snatch the glory from his rival. On home soil, Williams will be hoping for the local support to carry him to victory this weekend.

William Creighton from Northern Ireland will use his experience of the Welsh forests gleaned from last year in the hope of taking the fight to the two drivers ahead of him in the standings. Creighton has two podiums in the bank currently and would love a win to round out his second season in the series.

Kevin Horgan in his Skoda Fabia R2 has grown in confidence will need the other three to falter if he has any chance of the Junior BRC honours. It’s a tall order, but stranger things have happened in a BRC championship showdown.

Four young drivers are about to embark on their biggest and toughest challenge to date. The fearless, young Cadet crews will not only have to contend with four days of challenging stages but they will also have the added pressure of fighting tooth and nail for the Cadet Cup crown – and with it free entries into every round of the 2019 BRC series.

Elsewhere, John Morrison and Peter Carstairs will be putting their Mitsubishi into a victory parade as they have already claimed the National Rally Cup while Spencer Wilkinson and Glyn Thomas will be searching for two strong finishes to secure them back-to-back Production Cup titles.

The stage is set…

The BRC has helped springboard the World Rally Championship careers of the likes of Colin McRae, Richard Burns and Elfyn Evans. To join that elite club of BRC champions, crews must first face over 200 miles featuring classic gravel stages in mid and north Wales before a ground-breaking special stage through the heart of Llandudno town centre where the victors will be crowned in front of thousands of spectators.

“Dayinsure Wales Rally GB is going to be a cracker,” enthused BRC Championship Manager Iain Campbell. “It all comes down to the final two rounds, and by the end of the weekend we will be crowning several champions. It’s all about the number four in 2018. We have four BRC titles to be decided and in the main category, Junior BRC and Cadet Cup, four drivers in each have a mathematical chance of clinching it in Wales.

“Matt Edwards has been the stand out driver of 2018 and could seal the championship on home soil. However, the BRC is notorious for springing surprises as shown last year when the championship went down to the final stage on the final rally of the year. Let battle commence!”

Brand Manager for Prestone, Stephanie Hickford said: “The grand finale in Wales is set to be a showstopper, as we cheer on the drivers for the title decider.

“The team at Prestone are really looking forward to the event; we’ll be stage side all weekend as we host interviews with drivers, chat to supporters in Wales and celebrate 60 years of the British Rally Championship!

“Our brand ambassadors Henry Catchpole and Luke Barry will be filming exciting footage with the nation’s favourite rally legends and getting behind the scenes for all the trackside news. Keep an eye on our social media channels for all the latest news and action.

All of this adds up to an exciting weekend of motor sport action, with a large crowd expected to line the stages. Highlights from the rally will be broadcast around the world via Channel 4, BT Sport and Motorsport TV network shortly afterwards. 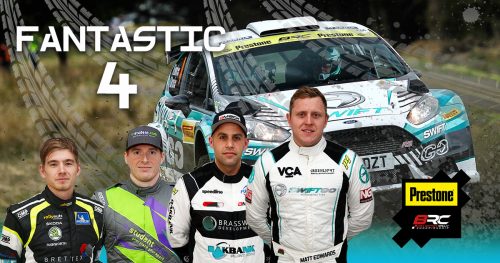