Ioan Lloyd got his Junior British Rally Championship campaign off to flying start on the Corbeau Seats Stages in Clacton last month.
The 19-year-old John Easson Award winner produced a scintillating drive on his Junior BRC debut, grappling his Peugeot 208 Rally4 to an impressive fourth spot on his first ever closed-road event.

“It was one of those events when everything went right,” explained Lloyd.

“The car was perfect, my co-driver Sion Williams’ pacenotes were perfect, and the roads were pretty good too!”

Ioan’s brilliant result was set against a backdrop of firsts – first time out in his new Peugeot 208 R4, first time on the event, and first time using their own notes – all of which failed to hinder their progress up the leaderboard.

The Saturday night opener comprised two short stages along Clacton Promenade, which was guaranteed to catch out the careless.
From there on in, they gradually increased their speed whilst balacing the desire for a strong start to the championship.
Their reward for a mature drive was fourth in the Junior Championship after 14 tough and unforgiving stages.

“It was a great result for us. The Peugeot is absolutely phenomenal, I reckon we are only at 50% of its full potential, so there’s a lot more to come from both the car and me. It ran faultlessly all day, so I’m really grateful to the team at West Wales Rally Spares who prepared it.
I can’t wait for the next round.”

The Beatson’s Building Supplies Jim Clark Rally, based in Duns, hosts round two of the BRC on May 27/28. 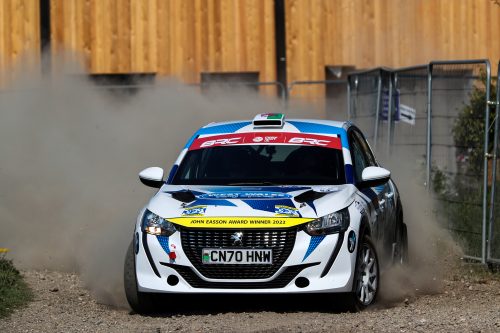