Lepley and WD-40 team up for BRC

BTRDA Rally series front runner George Lepley is one of the first of a new generation of rising stars to declare their intent for the forthcoming British Rally Championship season. The 22-year-old will contest the Junior BRC in a WD-40 backed Ford Fiesta R2 run by EDSL Sport.

Lepley is one of the hottest properties on the national rallying scene, having won several BTRDA titles, the young-gun is delighted to be joining Britain’s premier rallying series in 2020, as he and co-driver Tom Woodburn are set to fight for the €60,000 prize fund from M-Sport and Pirelli in the Junior Championship.

Before his BRC debut, variety was certainly the spice of life for the rising star.

“I have driven a lot of different cars in a short space of time. 2016 I made the step into the BTRDA series in the ST Trophy. It was a solid year for us, as we ended up as runner-up in the DMACK shootout after receiving a wild card entry, and winning a young chargers award which really kick started my rallying career.

“After focussing on exams in 2017, I came back full-time to rallying in 2018 – this time in the 1600 R2 Ford Fiesta. We claimed maximum points on every event, and we walked away with the Silver Star – the award for top two-wheel-drive competitor in the series.”

Rising through the ranks at a rapid rate, Lepley was set to make his BRC bow 12 months ago but sadly funds fell through at the eleventh hour ahead of the Cambrian Rally. After the upset – light was at the end of the tunnel.

“The BRC was the natural progression for us and we were gutted a year ago, but we had to take it on the chin and look forward. I received a call from Baz Jordan who said I could use his Historic Hillman Avenger. I am a rally fan through and through, so jumped at the chance and it snowballed from there. We secured the Historic Cup, Junior Championship and the Silver Star again – the first driver to win it in a front and rear-wheel-drive car in as many years.”

That wasn’t the end for Lepley in 2019. Such is the young Englishman’s adaptability, the driver from Nottinghamshire climbed into a Group N plus spec Mitsubishi Evo 10 for the Woodpecker Stages. His first time in a four-wheel-drive and George did not disappoint as he came home first in the Gold Star category, while mixing it with the R5 and WRC cars at the front of the field.

Ahead of the opening round next month, George was pragmatic about his approach and chances for the year ahead.

“I have been given a fantastic opportunity with WD-40, to build a long-term relationship and I intend to make the most of it, starting with the Cambrian Rally which I have done before, so the aim will be to be push for a good result in Wales before the rest of the season. All the other events will all be new experiences for me. I haven’t competed in Ireland or Belgium before, and closed road events will be a new experience for me too. We saw in the 2019 Championship that you don’t have to win every event to be top of the standings, I am looking at it as a championship and will play the game accordingly, but the most important thing is I will be gaining much needed recce experience which will help me in the future.”

George Lepley and Tom Woodburn will line-up in a WD-40 liveried car for the 2020 BRC season on the Visit Conwy Cambrian Rally on 8 February. 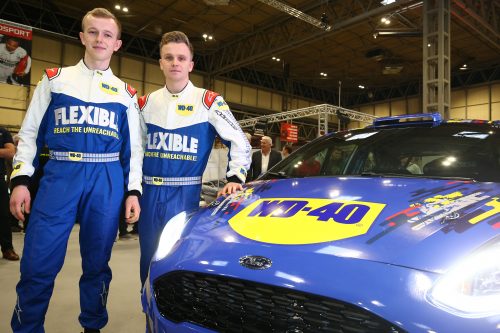