The MSA British Rally Championship returns to action next weekend (9/10 July) for round five of the series, the Nicky Grist Stages. After a one-day, fast and furious shoot-out in Scotland, Britain’s premier rallying championship heads to Wales for a two-day summer spectacular.

Last time out, Elfyn Evans took a commanding victory over fellow Welshman Tom Cave, both using the Ford Fiesta R5. Local hero David Bogie in a Skoda Fabia R5 was set to take a popular podium on home soil until substantial damage to his car’s radiator cruelly forced him into retirement on the road section back to Dumfries. Irishman Desi Henry put in his best performance to date and capitalised upon his fellow Skoda driver’s demise, taking his first BRC podium in the process.

The next challenge for the British Rally Championship crews will be the Nicky Grist Stages, based in Builth Wells in mid Wales. The two-day event will be a unique challenge for the BRC crews, with the rally being staged on two different surfaces.

On the first day, competitors will take on 45 miles of fast and flowing gravel through the forests. Teams will then have two-and-a-half hours on Saturday evening to change their cars from gravel set-up to asphalt specification in preparation for 59 fearsome miles over the Epynt Ranges on Sunday. The high-speed ribbon of Tarmac floats over the land and takes no prisoners with its blind crests, flat-out jumps and challenging corners. Those brave enough to conquer the stages will receive the spoils at the Ceremonial Finish.

DMACK British Rally Team driver Elfyn Evans took an unchallenged victory in Scotland, and the Welshman will be eager to continue his fine form as the series returns to his homeland next weekend. Currently competing in the World Rally Championship in Poland this weekend, the 27-year-old will then hotfoot it back to Britain in an attempt to further stretch his championship lead. The Ford Fiesta R5 driver will once again have a target on his back, as other drivers following will want to topple the WRC star.

Tom Cave took a season-best in Scotland, and is hungry for more as he works his way to the summit of the BRC podium. The 24-year-old played his ‘Joker’ last time out, doubling his points to bring him back into the title hunt. Cave took victory on the non-championship Plains Rally earlier in the year, which utilises similar stages to the Nicky Grist event and coupled with his Scottish success, the Michelin-backed driver will be one to watch on home turf.

Swedish sensation Fredrik Ahlin had a disappointing Scottish Rally by his incredibly high standards. The Pirelli Carlisle Rally winner retired on the fourth stage, and with it lost his championship lead. Ahlin will be on the charge in his Pirelli-shod Fiesta R5 from the off as he guns for glory on the mixed-surface event.

David Bogie (Skoda Fabia R5) will want to put two consecutive retirements behind him as he goes in search of a podium position in Wales. The former BRC champion hopes to elevate himself from seventh in the standings with a good points haul.

Fellow CA1 Sport driver Alex Laffey (Ford Fiesta R5) is gaining speed with every round. The Tarmac expert has a great deal of knowledge of the Epynt Ranges and will use his experience to good effect as he searches for his first outright BRC point. Thomas Preston chalked up his first BRC points in Scotland and is showing great promise as he continues to develop his newly acquired Skoda Fabia R5.

Another driver with a vast amount of Epynt experience is multiple MSA Asphalt Champion Damian Cole, who returns to the series in his Ford Fiesta S2000. Cole suffered a tough start to his first BRC season, but will hope his knowledge will guide him to his first finish of the year. Ollie Mellors in similar S2000 machinery gained a solid result and plenty of miles on the non-championship Tour of Epynt earlier in the year. The 20-year-old will be on a mission to bag more points in his SORT Oil Proton Satria S2000 in an effort to claw his way back into the top ten in the standings.

Desi Henry leads the Irish contingent in his Skoda Fabia R5, after a brilliant podium in Scotland put his championship aspirations back on track – a feat he will want to replicate on the Nicky Grist Stages. In hot pursuit are Circuit of Ireland BRC winner Josh Moffett in his Ford Fiesta R5 and Ulsterman Jonathan Greer in a rapid Citroen DS3 R5. Both Moffett and Greer have yet to play their ‘Joker’, and will be keen to score more valuable championship points ahead of their preferred events later in the season.

Wales has been a happy hunting ground for Jamie Anderson in recent years. The Fiesta R5 driver has got to grips with his new machine and will want to record a top five finish as he continues to rise up the championship table. Fellow Michelin Fiesta R5 runner Rhys Yates will be fired-up to bag his first points on gravel, while James Slaughter (Ford Fiesta R5) returns to the series to gain further mileage as he searches for his first outright BRC points.

The DMACK Junior BRC has seen three different winners in four events, and the chase for the title is beginning to become intensive between the next generation of rallying superstars. Championship leader Robert Duggan in a Vauxhall ADAM R2 has taken two wins so far this season in Ireland and England, along with a fine second overall on the Scottish Rally. The Irishman has yet to play his ‘Joker’ and holds a ten-point cushion over the latest member of the Junior BRC winners’ circle, Sindre Furuseth. The Norwegian won in Scotland last time out and is riding the crest of a wave heading to the Nicky Grist Stages in his Renault Twingo R2.

Gus Greensmith returns to the series after missing round four due to World Championship preparation. Behind the wheel of his Ford Fiesta R2T, the Englishman won the last time the championship was in Wales and the round one winner will want to add another victory to his name at the close of play next weekend.

Despite taking three podiums, Mattias Adielsson has yet to win a round of the BRC in his Vauxhall ADAM R2. The Swedish star has come close and is as determined as ever to show he has what it takes to become a title contender. Like teammate Duggan, he has yet to play his ‘Joker’ and cannot be discounted on the two-day classic.

Another man who will have his sights set on the podium is local driver Meirion Evans in his Ford Fiesta R2T. After two retirements at the start of the year, the Llanwrda-based driver has turned his campaign around with two fourth-placed finishes and will hope his experience of past Nicky Grist Stages will put him in good stead for 2016 event.

Adam Bustard in his Fiesta R2T has already scored two podium finishes this season and will be eager to emulate his mid-season form once again after a troubled run on the Scottish Rally.

Ford Fiesta R2 drivers Josh Cornwell, Guy Tyler, Nick Carr and Blair Brown will all want to rise up the ranks as they search for solid points in Wales. Nabila Tejpar suffered an accident in Scotland and has had to withdraw her entry for the Nicky Grist as her Fiesta R2 is too heavily damaged. MH Motorsport, which runs the 22-year-old, will now get the car ready for the Ulster Rally in August. Will Graham returns to the series in search of his first BRC points on the Nicky Grist.

In BRC2, Matt Edwards will be in action once again in his Mitsubishi Evo 9, aiming to not only claim a maximum class score but overall championship points to keep himself in the top ten. Chris Wheeler is the sole runner in BRC3 in his Citroen DS3 R3T, while a three-way battle is set to rage in BRC4 between Roger Platt (Fiesta R2), Marty Gallagher (Peugeot 208 R2) and Kumho-supported Tony Simpson (Fiesta ST).

In the National Rally Cup, Robert Blomberg (Mitsubishi Mirage) was the victor on the last round as he successfully played his ‘Joker’ to reel in championship leader Donnie Macdonald, who is now just five points up the road in his Mitsubishi Evo 9. Jamie Jukes in another Mitsubishi Mirage returns to home ground and will hope his experience will guide him to his first NRC victory.

Lee Hastings and John Morrison will both be targeting the podium in their Subaru Impreza and Mitsubishi Evo 9 respectively, while Chris Hellings joins the series for the first time in an MG ZR, making it 11 marques represented in the BRC so far this season.

BRC Championship Manager Iain Campbell has high praise for the Nicky Grist Stages team and is looking forward to the mixed-surface challenge.

“The Nicky Grist Stages is going to be a real test for the BRC crews,” he enthused. “To have two surfaces in one event is a real innovation from the organising team and will create a fantastic spectacle for the championship.

“There are so many scenarios that will make the event very unpredictable. Gravel drivers will hope to trail blaze on the first day, while Tarmac specialists will be aiming to stay on their coat-tails on the first day and then claw back the time on the asphalt on the second. The transition from gravel to Tarmac will be a real culture shock for drivers as they change from softly-sprung gravel machines to a lower, stiffer asphalt weapon.

“Then there are the service crews who prepare the cars. The teams will have just two-and-a-half hours to change the set-up for the second day, meaning they will not only be against the clock on the stages but in the Service Park as well.” 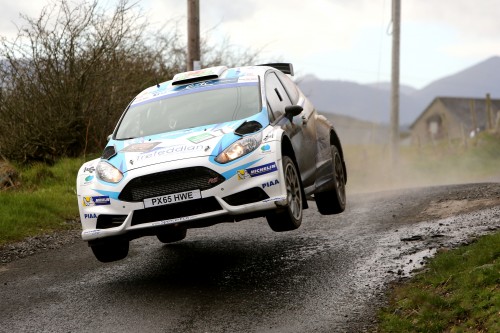