The Cadet Cup has become an important category in the Prestone MSA British Rally Championship with the newly formed series home to young competitors making the step from clubman competition to Britain’s premier rallying series.

The category was formed in the winter of 2016 and would quickly become an important class in the BRC with drivers aged 25 and under cutting their teeth on the same stages as their more experienced counterparts. Home to drivers in the older specification R2 Ford Fiesta, Vauxhall ADAM Cup and Ford Fiesta R2T National – the young stars of tomorrow have a lucrative carrot to chase as the season goes on. The Cadet Cup Champion will not only lift the trophy, but will also walk away with free entries into every BRC round in 2018 to help them graduate to the higher echelons in the championship.

Leading the way after two rounds is Dorking driver Josh Cornwell in his Ford Fiesta R2. The 18-year-old had a troubled season in the Junior BRC last year, with retirements and mechanical gremlins dogging a season that started so well on the Mid Wales Stages. Fast forward to 2017 and Cornwell is a new man. Settled at the MH Motorsport squad, Cornwell with Richard Bliss alongside has not put a foot wrong with the Surrey-star taking two wins from two at the start of the season. Can he make it a hat-trick on the Scottish Rally? Few may bet against him.

Out to put the brakes on Cornwell’s runaway wagon is Fergus Barlow. The man from Mull has shown a high turn of speed so far this season, taking his Fiesta R2 into second on the opening round. Barlow with co-driver Max Freeman alongside stepped it up a notch on the Pirelli International Rally. Fergus led the event and enjoyed a tussle with Cornwell at the top of the time sheets. Barlow’s demise on stage six denied BRC fans a down-to-the-wire fight but rest assured if the Scottish driver can tame his speed, he will win a round this year.

Tom Williams is a man taking full advantage of the Cadet Cup formula to learn the BRC ropes. The 2016 BRC5 champion only had to compete in one round last year to take the title so 2017 would be the young Englishman’s first full foray in the BRC. Having graduated from the highly competitive BTRDA series the Fiesta R2 driver is gaining confidence with every mile and can be boosted by his Pirelli second place last time out. Adding four points with his Joker, Williams is second in the standings and is hoping to add further podiums to his collection as the year unfolds.

Harper Adams University burst onto the BRC scene at the Autosport Show, announcing their plans on the M-Sport stand – confirming their participation in the Cadet Cup. Behind the wheel of the University Fiesta R2T National is James McDiarmid who before the season curtain raiser had just a few rallies under his rallying belt. With Max Haines Messenger calling the notes and the paint on the striking Ford barley dry, the pair took a superb podium on the Border Counties Rally before repeating the achievement on the Pirelli. The team is run completely by students and as it’s exam period currently, the team will miss the Scottish and hope to be back for round four next month.

Nabila Tejpar had strong year in the Junior BRC in 2016 and is hoping to build her speed in the cadet series in 2017. The Fiesta R2 driver suffered a sizeable roll on the Scottish Rally last year and has used the opening two rounds to build the confidence and improve the pace on gravel. Tejpar is eager to break onto the podium in 2017 and will be wanting to keep her consistency and reliability throughout the year to challenge for a good championship position come the end of the season. As well as a solid position in the Cadet standings Nabila currently is the only female driver in the BRC and has a large cushion in the BRC Ladies Trophy.

Alex Waterman is new to the BRC and is also using the Cadet Cup to learn pacenote making and a variety of different surfaces in his first full season of rallying. His commitment is unquestionable and the lad from Leatherhead will be looking for his first BRC points in Scotland and will no doubt be claiming a Cadet rostrum position before the Isle of Man.

Arron Windus makes a welcome return to the BRC. After entering an Australian Rallycross meeting last weekend, the Vauxhall Motorsport driver has flown direct to the UK to take to the start line for his first Cadet Cup contest this weekend. Watch the likeable Aussie go as he debuts the Vauxhall ADAM Cup in the Cadet Formula. 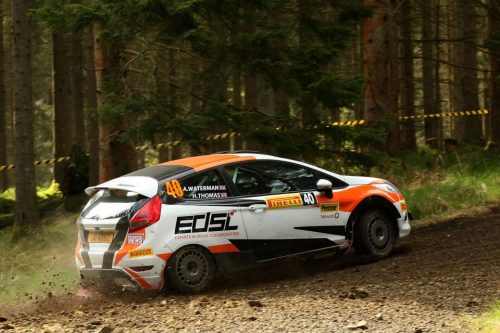