Bart Lang and Sinclair Young snatched their first Cadet Cup win in the Prestone MSA British Rally Championship by the narrowest of margins in their Ford Fiesta R2 on the Renties Ypres Rally.

Lang inherited the class lead on Stage 20 after problems struck round one winner Jordan Reynolds. The Myerscough University driver finished third on the opening round and was hoping for more of the same on the first Tarmac event of the season.

Running in third on the opening day, the young-gun leapt into second when Finlay Retson’s gearbox cried enough on Stage 16 and soon honed in on Reynolds and navigator Peredur Davies out front. When Reynolds retired with a mechanical failure on the final loop, Bart pushed on and assumed the position of rally leader heading into the final stage.

With the final few stages delayed due to incidents further up the order, darkness descended and Lang and Young had to take on their first night stage together. As they threaded the Fiesta through the stage, the pair at the finish line furiously refreshed their phones for results to see if they had done enough.

What they weren’t expecting was a charge from Fred Field in a Opel ADAM Cup car. Field endured a difficult opening round and was out to make amends and open his points account for 2018. Fred and co-driver Josh Davison used all their experience to launch a late charge. Field knows the ADAM like the back of his hand and went 22.7 seconds quicker on the final stage. The run by the Opel driver was not enough as Lang and Young edged the win by 1.9 seconds.

Field will be pleased with his efforts in the underpowered Cup car and playing his Joker enabled him to pick up another four points to sit fourth in the standings.

Johnnie Mulholland and Jeff Case kept a low profile on the event and didn’t want to be drawn into any battles as the pair were adamant a clean event and finish in Ypres would be a result in itself for this season. With the Irish driver not wanting to know his times, he set about leaning about the Belgian Tarmac with a dodgy starter motor and a few small moments the only concern for the Fiesta driver. A fine third was the reward, pushing Mulholland into third in the series.

Finlay Retson and Tom Hynd put the car off on Shakedown on the Thursday evening but then produced a herculean effort to get the car ready for the start of the event. Pushing hard on his first go in Ypres, the Scot pushed leader Reynolds hard but like the Englishman had to retire early – this time with a snapped gearstick and clutch failure putting the Ford Fiesta driver out of the event.

Will Graham and Max Freeman experienced a tough overseas event. A broken driveshaft on the first day was followed by a crash on the second day. Both walked away unscathed but were left wondering what might have been. 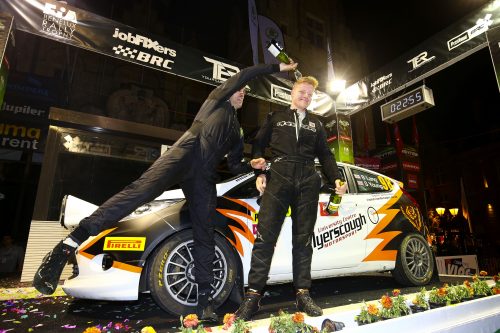