Bart is the 2017 BTRDA Rally First Champion with an impressive seven out of eight class wins and is also the current English Junior Rally Champion. This success has enabled him to progress to the British Rally Championship in his bid to climb the motorsport ladder.

Myerscough College students have rebuilt a Ford Fiesta R2 for the series and will run it during the upcoming season. This final year of Bart’s study at Myerscough sees him pair up with the college with a view to extending his ties beyond the 2018 season.

The team will contest all six of the championship rallies which conclude at Dayinsure Wales Rally GB alongside the World Rally Championship. Both the crew and Myerscough will have increased exposure across the UK and Belgium throughout this season.

Bart commented on the up-coming season:

“Having won the English Junior Rally Championship last year, the partnership with Myerscough paves the way for a really successful year. I know the students can do the job absolutely fantastically, so I can’t wait to get on with it!”

“Bart has achieved excellent grades in his study, mirrored by excellent results in his rallying. We are looking forward to helping him showcase his talents in the BRC alongside our own motorsport students who will run the R2 this year.”

The first round of the British Rally Championship, the Border Counties Rally, is based in the historic Scottish Borders town of Jedburgh. The all gravel event takes place in the Kielder Forest complex on Saturday 10th March. 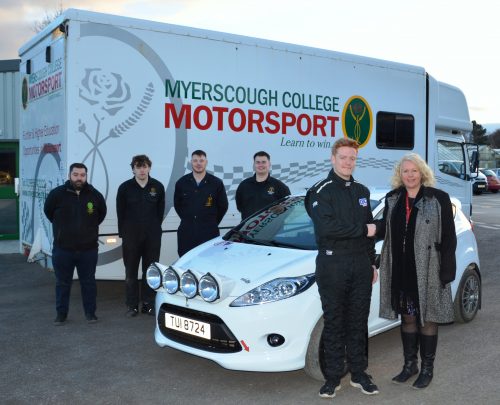