Laffey ready to push on after Ypres podium

Alex Laffey is buoyant after his first podium on the recent Renties Ypres Rally. We caught-up with the M-Sport driver after the first four rounds.

Laffey finished runner-up in the BRC standings last season in his Ford Fiesta R5 but 2019 has been a rollercoaster on the stages to date. Three difficult rounds were put well behind him when the Scottish driver got stuck into the challenging Ypres lanes. After keeping a clean pair of heals, Alex chalked up his first asphalt BRC podium.

“Our first proper BRC podium was a mega feeling and to do it in Ypres was amazing. The crowd and the atmosphere made it very special to stand on the podium in the middle of the market square. It was a proper occasion and what a way to do it! To have ROKiT onboard for the first event was extra special to kick start that relationship. To have a brand like that in the BRC is very special as they already support the Williams F1 team and are growing its Tennis involvement too.”

So how were those ditch-cutting stages in the scorching heat? The answer… a breeze for the young M-Sport driver!

“The event was tough, with the amount of stages and miles in a short space of time and the heat added another dimension this year. The heat actually wasn’t too bad. So long as I kept drinking I didn’t have a problem. We had a good event and it was pleasing to first of all get a podium but a strong finish as our season has not gone to plan to date.”

As well as having the experienced Stuart Loudon alongside, Laffey is being coached by three-time BRC champion Mark Higgins. The ever improving Laffey had been disappointed with his showing before Ypres – as he hasn’t been able to demonstrate a step forward in pace.

“We have had a troublesome season so far. We had an ok first round [Cambrian Rally] the competition was very strong but we didn’t have a chance to see where we were as we got a puncture early on, and on a short event we lost too much time to fight back. The same can be said for the Pirelli but I was pleased to at least get some points out of both. The biggest disappointment was West Cork. It’s known that I love the Tarmac and I enjoy rallying in Ireland. I expected to go well there and was really annoyed with the chicane spin as that small impact damaged the car quite badly and we couldn’t continue. I really want to make up for that on the Ulster.”

As Laffey eluded, next stop, the Ulster Rally – the last Tarmac round of the season. Down to a one-day format this year, Laffey will be pushing on for another strong result as he walks with a spring in his step after his Belgian success.

“I am really looking forward to the next event. Counting down the days! Ypres felt like a long time ago! Ulster is always challenging at this time of year with the changeable weather conditions making it a lottery on set-up and tyre choice. The roads are really nice to drive, and I get on well with the bumpy nature of the lanes. As for hopes, I would always like a podium and now I have one, I would like more, but I am under no illusion its going to be a tough one as it will be a strong entry once again.”

Alex Laffey will be threading his Ford Fiesta R5 down the lanes of Northern Ireland for the Today’s Ulster Rally on the 17th August. 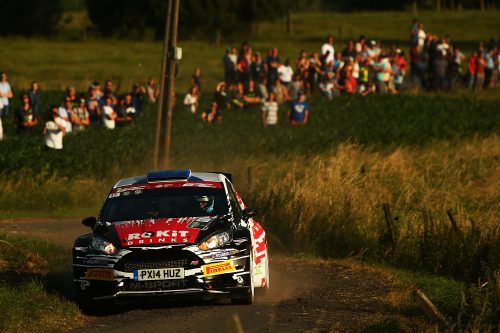