Laffey has eyes upon Epynt

Scottish driver Alex Laffey has his eyes set firmly on the Epynt Ranges when the MSA British Rally Championship heads to the Nicky Grist Stages for round five of the country’s premier rallying series next weekend (9/10 July).

The four-time MSA Asphalt Junior Rally Champion has had an educational first half of the year, with the action so far being predominantly staged on the loose. Laffey, however, has shown great strides in performance and feels more comfortable after every event on his ‘alien’ surface.

“It has been an interesting season so far,” he explained. “It has been a lot of firsts as I had limited gravel experience coming into the season and retiring on the Mid Wales Stages didn’t help either my confidence or experience. We have gained good knowledge since, though, and put plenty of miles under our belts on the Pirelli and Scottish. We are getting closer to the pace at the front with every event, which is quite pleasing to see.”

Laffey enjoyed his first taste of Tarmac in the BRC back in April on the Circuit of Ireland. The CA1 Sport driver suffered with a poor road position on the Irish event but managed to record a fine 11th in the BRC category – missing out on his first BRC point by 20 seconds.

After the first day of the Nicky Grist Stages, the remainder of the season will take place on his preferred sealed-surface. First up is Epynt, a mecca for British Tarmac rallying and a location where Laffey has plenty of experience, having contested six events on the ranges. With Andrew Roughead sat alongside, the Carnoustie-born driver is eagerly anticipating the remainder of the campaign in his Ford Fiesta R5.

“I always look forward to getting in the car, especially when there are only two weeks between rounds,” said the 26-year-old. “On the Saturday, I would like to stay on the coat tails of the leaders on the gravel stages and then have a good run over the Sunday stages on the Epynt Ranges.

“Epynt is amazing and I hope my experience will pay dividends, as it is a tough place to go for the first time. You sit on the limiter a lot with your foot flat to the floor over jumps and crests, with a lot of fourth and fifth-gear corners. It is narrow in places and if it is wet, that adds another dimension as it becomes really slippery which could catch a few people out.”

Laffey has been patient over the course of the first few months of the season, biding his time in preparation for the forthcoming asphalt rounds.

“The Ulster is a good event and with the new roads and stages, it will hopefully bring some technically challenging sections,” he added. “Then there is the Isle of Man, which I am really looking forward to. I just wish I could play my ‘Joker’ on the Manx!” 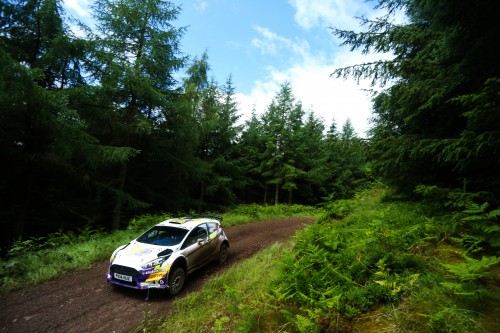