Alex Laffey and Dai Roberts will contest this year’s Prestone MSA British Rally Championship with M-Sport’s Ecoboost-powered Ford Fiesta R5. Contesting all seven rounds throughout the 2017 season, the pairing will look to continue their development in one of rallying’s best proving grounds for up-and-coming talent.

Since starting his career with the Ford Fiesta ST in 2009, Laffey has been a regular on the British rally scene and has since progressed through the ranks with M-Sport’s range of Ford Fiesta rally cars.

Securing his first outright victory at the 2014 edition of the Rally of the Midlands, Laffey is hungry for more and keen to make his mark on the national rally series.

Contesting the championship behind the wheel of the Fiesta R5 last year, Laffey went up against some of the biggest names in rallying – in direct competition with the likes of Elfyn Evans who won three stages at the opening round of this year’s FIA World Rally Championship.

Having regularly challenged for the top-ten positions, the Scotsman will be looking to be a regular points-scoring contender throughout this year’s championship and is determined to further develop his skills with the aid of M-Sport’s guidance and expertise.

Enjoying support from providers of high quality student accommodation, U-Student, as well as tyre giants Pirelli, the pairing will also proudly display their association with the Gareth Roberts Memorial Fund – a charity in memory of co-driver Robert’s late brother which is dedicated to supporting the rally community throughout the British Isles.

Both partners as well as the charity are proudly displayed on Laffey’s eye-catching new livery which draws inspiration from his Scottish roots with a purple and lime-green tartan-enthused design.

To prepare for the season ahead, Laffey and Roberts will contest next month’s Malcolm Wilson Rally which runs from M-Sport’s hometown of Cockermouth. With 40 miles of stages through some of the most iconic forests in the English Lake District National Park, the event will provide the perfect test for the season ahead.

“Once again I am really excited to be working with M-Sport. I really enjoyed last year’s championship and it is great to be coming back for another year. I really want to bring my pace on again this season, and working with M-Sport will provide the prefect platform for that. I am also really happy to have Dai [Roberts] on board calling the notes this season. He has a lot of experience and will make a great addition to the team.” 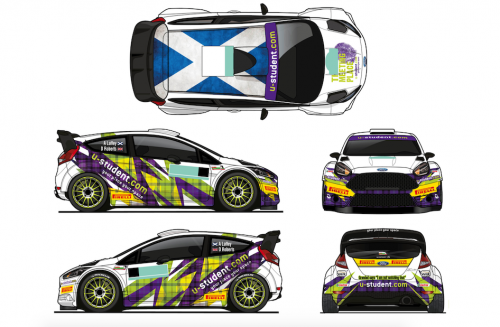