Two passes of the 11-mile Longformacus test would be enough to test event the most experienced of BRC contender and with the second pass under the cover of darkness, the Scottish Borders roads would provide an unforgivable prospect for the BRC1, Junior and National Rally Title competitors.

The first stage of the rally saw Cronin and co-driver Mikie Galvin show his hand early on with a blistering start, stopping the clocks eight seconds faster than his Michelin-backed Polo counterpart, Osian Pryce. James Williams was adapting to his Hyundai i20 with lightening speed, just a further six seconds back in third.

But the second pass would provide no mercy for round one winners Osian Pryce and Noel O’Sullivan who suffered a puncture around four miles into the stage, dropping over a minute in the process and ending the day in sixth. With 1m 19s to make up on Saturday’s stages, Pryce will be aiming for damage limitation over the days seven tests.

Another positive time from Williams saw him round out the opening day in second spot as he and Dai Roberts continue to learn the top-flight machinery. It was the Hankook Tires Fiesta Rally2 of Garry Pearson that rounded out the top three as crews headed back to the Duns for the overnight halt. The local ace was loving the Borders closed roads close to home and had a clean run through both passes to end the day 13s shy of Williams. With Dale Furniss in the co-drivers seat, Pearson professed to be happy with his opening day performance, but admitted he would struggle to match the pace of leader Cronin.

Elliot Payne and Patrick Walsh took their Fiesta Rally2 to fourth overnight after two encouraging stage times, whilst Merion Evans and Jonathan Jackson struggled to get into a rhythm in their Polo to round out the top five.

Ruairi Bell endured a nightmare start to his Jim Clark Rally with technical issues in his Skoda Fabia leaving him and co-driver Max Freeman languishing down in 12th. Second fastest over the second pass showed their capabilities and could well capitolise on any issues with the front-runners on Saturday.

Jason Pritchard struggled with confidence in his Polo on stage one, but went about looking for it on the second pass and professes to be gaining speed with every passing mile. He and co-driver Phil Clarke lie eighth in BRC1 overnight.

It was one stage win apiece for Kyle White and Eamonn Kelly but a trip into a hedge for White on the second pass saw Kelly move into the Junior BRC lead by 17s. White and co-driver Sean Topping took their Peugeot 208 Rally4 into an early lead before their time zapping incident, leaving Kelly’s Fiesta to steal the march with Conor Mohan in the co-drivers seat. Johnnie Mullholland and Eoin Treacy sit third with Kyle McBride and Liam McIntyre fourth in their Fiesta and leading Academy Trophy crew.

Ioan Lloyd and Sion Williams endured an early exit on the opener in their Peugeot 208 Rally 4.

Alan Carmichael made a superb return to the National Rally Title battle, taking the overnight lead with Arthur Keirans on the notes in the Hyundai i20. Round one victors Craig Jones and Ian Taylor suffered turbo pipe issues in the opener, leaving Carmichael to open up  a lead of over 3mins. William Mains and Emily Easton-Page sit third in their Nova. 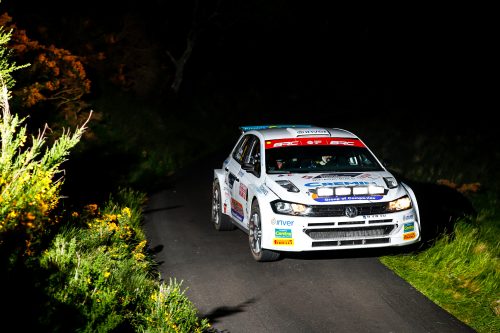