Kelly returns for a shot at Junior BRC gold

Last year’s Junior British Rally Championship runner-up Eamonn Kelly will return to the hotly contested series in 2022 in a bid to go one better and seal the prestigious BRC title.

The twenty-three-year-old Co. Donegal driver will mount his second campaign behind the wheel of a Laois Hire / HSS Hire and Northgate Vehicle Hire backed Ford Fiesta Rally 4 in the seven-round series which last year saw him take a Junior victory at the arduous Grampian Forest Rally in Scotland and the final encounter at the Ulster Rally.

Three more podiums littered his scoreboard, but it wasn’t quite enough to catch William Creighton who sealed the honours with second place in Ulster, although one retirement at the Cambrian Rally could well have proved the difference between first and second.

But to challenge Junior WRC regular Creighton on a debut season in the BRC is an impressive feat, even more so when you learn that Kelly had never contested a gravel event before he tackled last years championship.

“I had my own expectations heading into the BRC last year and most of that centred around being consistently fast, that was the focus” says Kelly.

“We really did put a big effort into our season and performance and that meant our results were justified. Competing against the likes of Will [Creighton] really brought us on as a crew as his experience meant we could learn from that in a way. I’m grateful that we got the chance to race him”.

Kelly will return in 2022 and go head-to-head with a list of progressive youngsters all eager to battle for the chance to win a prize drive opportunity with Hyundai Motorsport Customer Racing to tackle a round of the 2023 World rally Championship in a Hyundai i20 N Rally2. With several unknown pilots joining the series, how does Kelly rate his chances this time around?

“It’s a new year and a new start so it’s hard to say. It’s a clean slate and I feel refreshed heading into the season, but then again so will all the other drivers. It’s the Junior BRC – the competition is always going to be tough.”

“But I feel like a new driver coming into this season. We were so close [to taking the title] on our debut year so will be pushing ourselves further this time around. There will be plenty of competition to keep us on our toes”

Thanks to last years campaign, Kelly will have experience of key events such as the Nicky Grist Stages, the Cambrian Rally and Trackrod Rally Yorkshire but will also face, like many Juniors this season, new challenges thanks to the re-shaped calendar.

“I love a challenge and new events are always great to try out. It’s an equal playing field for everyone really as we all have the same events to do for the first time. From the homework I’ve done all the events look great and that all adds to the excitement. New rallies don’t phase me as much this year. We have a new angle of approach and are more prepared than ever.” 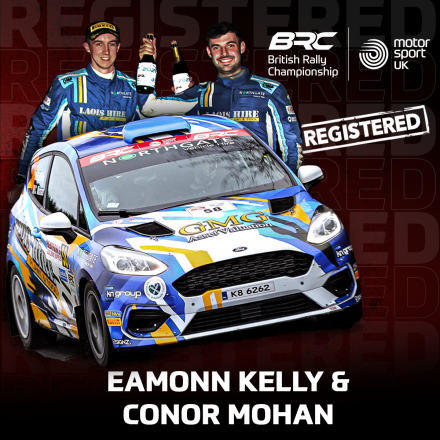