Sacha Kakad and James Aldridge have nailed their colours to the mast by confirming their Prestone MSA British Rally Championship registration this morning in their Ford Fiesta R5.

The former Mitsubishi Evo 9 driver has plied his trade in the BTRDA championship in recent years and in 2018 will step-up to Britain’s premier rallying series for a selected campaign this season in the four-wheel-drive supercar.

“Iain [Campbell] was fundamental in trying to persuade us to join the championship and really the stages, the events and competition look great so after a few years of looking we thought we would come and have a go and commit.”

Kakad has recently taken delivery of the M-Sport Fiesta R5 and will use the car for the very first time on the opening round of the new championship season.

“This will be our first time we have driven the R5 car in anger. We have done a few tests, so its going to be a lot of feet finding. The car is so much lighter compared to the Evo, it stops quicker, turns quicker and accelerates quicker. It’s going to be a big learning weekend for us.

“I have done some bits in Kielder with the Carlisle Stages before but never done the Pirelli and the stages look fantastic this weekend and will be very fast. I need the seat time most importantly so expectations are realistic for the event. There are some top quality drivers here this weekend in the BRC so I would like to be finishing amongst the four-wheel-drive cars this weekend, that would be great achievement.”

After signing on the dotted line less than 24 hours before the start of the opening round, Sacha is now tempted by the lure of what the championship has to offer.

“We are defiantly having a few discussions as to the rest of the year, we had planned to do the Pirelli but now I think we are going to do Wales Rally GB and also to try and do more if work and time allows as the series looks great. 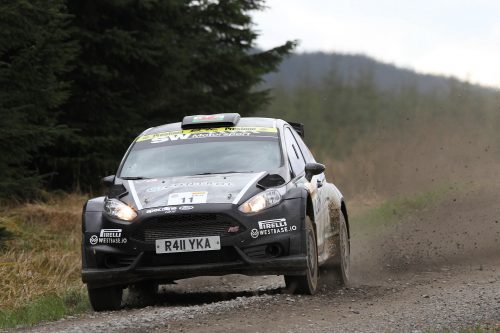