Just what does it take to build a Fiesta R5?

M-Sport was one of the first car builders to delve into the new FIA R5 formula when it was created. Unlike other manufacturers, this was an M-Sport project and the business risk was that this car was to become the main product for the company for the foreseeable future.

With the car taking victory in WRC2 on Rally Sweden in February, against the might of the Skoda factory team it is still very competitive. It is testament to the way the technical regulations for the R5 class have been written that the category has lots of manufacturers competing in, that the competition is still very close. This is really what everyone wants.

Now in the fifth year of production and with the 270th version just about to leave Dovenby Hall, the Fiesta R5 has been a commercial success. In that time about one car has been built a week and they have been shipped to over 20 countries, worldwide.

So how long does it take to build a Fiesta R5?

A new registered Fiesta is delivered to M-Sport where it is stripped down to a bare shell. This process takes a week.

Next the work starts on the fitment of the extensive roll-cage and strengthening. This is the longest part of the process and takes a fortnight.

Once the roll-cage is in place, the shell gets painted and this takes a couple of days.

Now you have a shell, painted and prepared, the process of adding the component parts to make it a competitive rally car starts. The fitment of the engine, gearbox, wiring loom, suspension, interior etc. takes another week.

So in just over four weeks you can go from having a road going Fiesta town car to a fire-breathing, four wheel-drive world rally stage beating machine.

The doors, bonnet and tailgate from the donor cars, once slightly modified are carried over to the rally car but not much else is. However, one of the big things about the R5 technical regulations is the cost-cap that fixes the price of the rally car. This does mean that some standard, though slightly modified, parts do make it onto the competition car. For example, the steering rack comes from another production Ford model and there are other parts fitted that come from other motor manufacturers.

There is very little, in anything that is common to both the Fiesta R5 and the Fiesta R2. They are very different propositions.

So as the 270th car is about to be built, the design phase work on the all-new Fiesta R5 is currently being undertaken, the aim being to launch the new R5 car during the 2019 season. This means that M-Sport are one of the last to launch their second-generation R5 car but with class victories still coming weekend after weekend, the current car is most certainly no slouch. 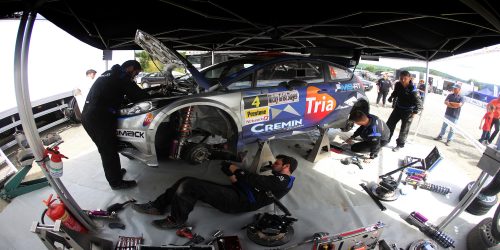