In the Prestone MSA Motorsport News Junior British Rally Championship, the action was red-hot across the two days in the front-wheel-drive R2 class for drivers aged 26 and under.

Steve Røkland went quickest out of the blocks and looked to have it all sewn up after the opening day with 15.3 second advantage in his back pocket with a day to go.

With Dai Roberts expertly guiding the Norwegian in the Peugeot 208 R2 the pair built-up an even bigger cushion at the start of the second day but had not accounted for a late charge from local man Josh McErlean and navigator Aaron Johnston. The Irish teenager threw caution to the wind to an attempt to catch Røkland. With only two stages to go, a head-to-head was set-up between the ice-cool Norwegian and the confident homegrown hero with less than half-a-second between the two crews.

Unfortunately, it wasn’t to be for McErlean as a puncture and a small excursion put him out of the event to allow Røkland to sweep his way to victory.

William Creighton and Liam Regan in their Peugeot 208 R2 couldn’t quite match their Junior BRC Ulster Rally win of 2017 but were pleased to return to the podium after a retirement on the Ypres Rally.  They kept out of trouble and played their joker, earning Creighton an additional four points to put him right back into the championship hunt.

Kevin Horgan and Liam Fouhy stepped onto the rostrum for the first time in their Skoda Fabia R2. The Irish pairing were disappointed by their first day performance but a spirited fight-back led them to their best result to date as they sprayed the champagne at the finish in Antrim.

James McDiarmid and Gareth Clarke were contesting their first Ulster Rally together in the Ford Fiesta R2T and battled through the elements to claim some all important points while just behind them were Nabila Tejpar and Richard Bliss who rounded out the JBRC in their Peugeot 208 R2.

James Williams crossed the Irish Sea as series leader in his Vauxhall ADAM R2. Along with new co-driver Dale Furniss, the Welsh duo were on the cusp of a podium before a visit to the scenery damaged the radiator forcing them into an early bath.

Local crews Marty Gallagher and co-driver Dean O’Sullivan and James Wilson and Gavin Doherty both retired early. Gallagher went off the road on stage four while Wilson suffered a roll on Shakedown. 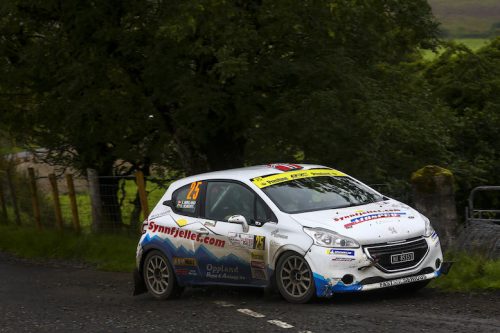