Both the Norwegian and Welshman applied their trade in the Junior BRC last season in front-wheel-drive R2 cars and as a reward for their championship exploits, the pair joined the Hyundai Customer Racing test team for a day-long test in the iconic Kielder Forest in Cumbria. There, the pair got to experience the four-wheel-drive, turbo-charged Hyundai i20 R5 – a car very much at the sharp end of Britain’s premier rallying series. In fact, the car at their disposal was the same car Tom Cave and Dale Bowen took the Pirelli International Rally victory in just a handful of hours before.

The test day enabled both young chargers to sample the Korean machine on the challenging, fast and flowing five-mile stage. Adding to the experience, they also worked with Hyundai engineers on car set-up and PCRS Rallysport – one of the leading teams in the BRC, who provided further knowledge on event preparation.

“It was great to drive an R5 car on such a great stage. I haven’t driven many miles in a R5 car before, so it was like going back to school to learn everything and it is great to work with the team to take in as much as I can. It was great to have an engineer on hand and get his feedback as the data enabled me to improve, get quicker and feel more comfortable in the car. It was absolutely fantastic and a great opportunity from Hyundai and the BRC.”

“I am really, really impressed with the car. I have never driven a four-wheel-drive car on gravel before, so it was day of learning for me today. We did six runs and what a car the i20 is, and I am lucky that Tom [Cave] set the car up so well, which meant I could just get in, drive and get up to speed quite quickly. It’s such a step-up from an R2 car, the braking is incredible, you have so much more grip. I can’t speak highly enough of the team, making us feel welcome and working with the Hyundai engineer has been really beneficial and I would like to thank Hyundai, PCRS and the BRC for giving me the chance to sample the next step.”

“The test with Steve and James was the perfect end to a very successful weekend for Hyundai customers in the Kielder Forest, following Tom Cave’s win on the Pirelli International Rally on Saturday. It was great to see how easily both drivers adapted to the car, and were able to work with engineers on hand to make adjustments to the set-up and their style to get the best out of the Hyundai i20 R5. I am sure that both men have successful rally careers ahead of them, and hope that they can make the move to compete in the i20 R5 in future.”

“After seeing Steve and James fight tooth and nail all year in the Junior BRC last season it was great to see them both receive this amazing prize from Hyundai Motorsport and PCRS Rallysport. These two are right at the sharp end of R2 drivers in Europe and to watch them take that first step into the R5 category was a really rewarding sight and I was amazed at how quickly they immersed themselves with the team and just how quick they were behind the wheel. A few more miles and I think both Steve and James could be fighting right at the front in the top flight of the BRC. I would like to thank Hyundai and the PCRS Rallysport team for helping us organise this fantastic prize.”

Steve Røkland will continue his campaign in the FIA European Rally Championship while James Williams is set to return to the British Rally Championship on the Renties Ypres Rally – the scene of his first JBRC triumph one year ago. 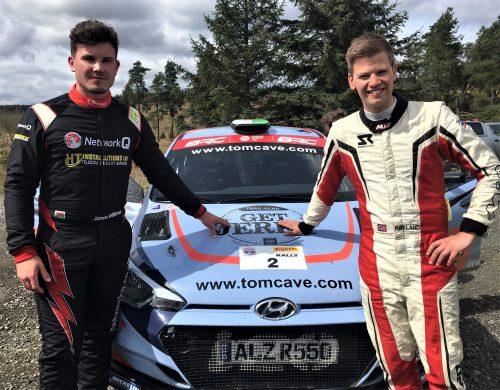