Junior BRC set for battle on the gravel

It’s two rounds down of the Motorsport UK Junior British Rally Championship and two different winners have stood on the top step of the podium so far in 2022.

With the race to secure a drive in a Hyundai i20 N Rally2 in 2023 hotting up, lets take a look at how the opening asphalt rounds of the season have played out for our progressive youngsters.

Round one saw Norwegian Ola Nore Jnr and co-driver Jack Morton take a sensational BRC debut victory on the east coast, as the season kicked off with the Corbeau Seats Rally Tendring & Clacton in April.

Arguably a great leveller, as none of the current JBRC contenders had contested the event previously, the short but sharp Essex roads witnessed an intense battle for top honours which would eventually go the way of the Norwegian in his Ford Fiesta Rally4.

But it wasn’t a simple arrive and win for the FIA European Rally Championship ace. Last years Junior BRC runners-up Eamonn Kelly and Conor Mohan were hot on Nore Jnr’s heels and were never more than 2.5 seconds apart all rally long. In fact, Kelly had led for most of the rally before being usurped on the penultimate stage, falling away to second.

Kyle White and Sean Topping brought the noise with their new-for-2022 Peugeot 208 Rally4 and briefly led the Juniors before dropping to third as the rally progressed.  Fellow Peugeot crew Ioan Lloyd and Sion Williams would also make their Junior debut in Clacton and coped admirably with their first closed-road event. Fourth place was their reward.

Last years BRC Academy Trophy winner Johnnie Mulholland stepped into an ex-William Creighton Fiesta Rally4 for this season and would continue to build his pace in the Juniors, taking fifth spot with Eoin Treacy alongside.

Kyle McBride and Kenny Bustard battled with a string of issues, but kept their cool to ensure a finish and the maximum Academy Trophy score in their Fiesta R2T.

Staying on the grippy stuff for round two, the Beatson’s Building Supplies Jim Clark Rally made a welcome return to the BRC tour at the end of May and would provide an enticing challenge of some of the best closed-roads the Scottish Borders has to offer.

Nore Jnr would be forced to skip the Duns based event due to ERC commitments so it would enable the other contenders to close in on the leader. Not only would they battle amongst themselves but would also need to conquer the stages which have historically tested the best drivers in the business.

First to come unstuck would be Lloyd, who crashed out of the rally on the very first stage on Friday night. The brutal 11-mile Longformacus test claimed his 208 Rally4 with a sizeable off, both crew members emerging unscathed, but the race will be on to ready the Peugeot for the next round.

White emerged as leader but would lose that lead after a scrappy second run. Kelly had his own issues after catching cars and struggling to find reverse but held the all-important lead heading into the second day – 17 seconds up.

Kelly would storm through leg two with a Junior BRC masterclass, and despite White digging deep, the Irishman took his Fiesta Rally4 to a blistering win and thanks to playing his Joker, bags an additional five points for his campaign.  White continued to rack up the points with second whilst Mulholland would also build his confidence in the Fiesta to take a podium in third.

McBride found the Scottish roads a challenge but once again scored a confidence boosting finish and maximum Academy Trophy points.

The gravel of the Nicky Grist Stages calls next, as the Junior BRC makes its first trip onto a loose surface in 2022. Nore makes a return and is likely to ensure everyone brings their A-game to Wales.

Kelly has a 15-point lead over White but with the competition as tough as ever in the iconic Welsh forests, the points leaderboard could well tell a different story by the time the crews reach the Builth Wells finish in July. 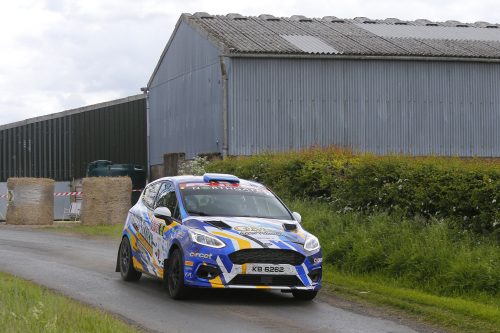