Two-time Junior British Rally Championship runner-up William Creighton got his 2021 campaign off to the best possible start by winning the opening round of the season, the Neil Howard Stages. Creighton and co-driver Liam Regan enjoyed a start-to-finish win in their Ford Fiesta Rally4 around the Oulton Park Race Circuit but would not have it all their own way during the day, with challenges from contenders across the Junior category.

Eamonn Kelly and Conor Mohan would also make their Junior BRC debut at the Cheshire circuit, securing two fastest times on their way to third in the category in their Fiesta Rally4.

A packed entry list of progressive youngsters would head to the opening round of the season, all eager for a strong start to their campaign and the chance to drive a Hyundai Motorsport Customer Racing i20 N Rally2 at a round of the WRC in 2022.

Creighton took the initiative early on with an impressive seven second lead over White with BRC returnees Brian Brady/Eamonn Creedon, David Kelly/Dean O’ Sullivan and Finlay Retson/Rhys Stoneman and Ruairi Bell/Gareth Parry all covered by just ten seconds to sixth. Brady suffered a penalty for a chicane misadventure to see David Kelly inherit third on the first proper stage of the day. Casey Jay Coleman/Grace O’Brien suffered a maximum time with car issues seeing them park up on the circuit infield.

White set a blistering pace on the third to claim his first stage win but Creighton responded on at the halfway point to keep the gap to 11 seconds. The battle for the podium spots would hot up as Brady would have been third had it not been for his penalty earlier in the day.

David Kelly’s pace was increasing during the day and would be in-line for s strong result, but a wrong split on the fifth stage put him out of contention and opening the door for Retson to assume the podium spot. But creeping up behind was Eamonn Kelly, taking that third spot by the very next stage to set the leaderboard in stone over the final three tests.

Eddie Lewis/Dom Adams were a frustrated seventh, with Johnnie Mulholland/Calum Maguire taking the Academy Trophy win in their Fiesta R2T. 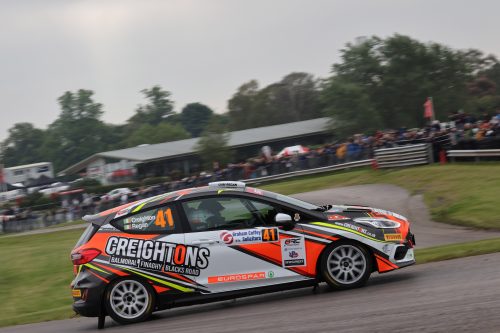