The new-look British Rally Championship (BRC) will feature a BRC 2 category when it returns in 2016 and JRM’s brand-new Subaru is a perfect fit for the class as it’s the newest production-specification rally car in the world.

With that in mind, Campbell was invited to a JRM test day at the MIRA proving ground in the UK last Thursday so he could have a closer look at the car and sample its performance from the co-driver’s seat.

He was driven around MIRA’s ride and handling circuit by JRM’s experienced test and development driver, Terry Kaby

“The test was a great opportunity to see how the team operated and to see how the car has been put together,” Campbell said. “It was also a chance to speak to a man of Terry Kaby’s experience and to get his thoughts on what constitutes a good production rally car.

“There is a perception that production cars are big, heavy and unwieldy on the stages. But the JRM Subaru is far from that.  I was very, very impressed with the way the car handled – particularly on a MIRA track that has some challenging contours and a camber that was vicious.

“Another thing that really impressed me was the torque of the car. It was constant and just kept going and going. The JRM Subaru was an impressive bit of kit and it was extremely useful to get a closer look.”

JRM Senior Sales Manager, Steve Smith, welcomed Campbell’s verdict on the team’s Subaru. He said: “The BRC 2 category is a big part of our plans for 2016 and it was great that Iain could come along and see what the latest production rally car technology is all about.

“Our Subaru is a serious rally car and is a great option for teams and drivers that have a limited budget, but want to win their category in one of the world’s most prestigious rally championships.” 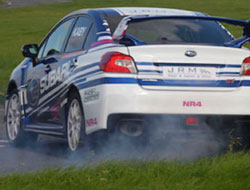