British Junior 1000 rally champion Josh McErlean will graduate into the Prestone MSA British Rally Championship in 2017 with co-driver Damien Duffin in a Citroen C2 R2 Max. The 17-year-old will become one of the youngest drivers to enter the championship as he is set to tackle the full Junior series this year.

“We won the British Junior 1000 series last year and we thought – where do we go next?” Explained McErlean. “We acquired the Citroen C2 R2 Max and have done a local rally to shake the car down. The BRC opportunity came about and to go and do the pinnacle of UK and Irish rallying was a dream come true. The level of competition is so high and we wanted to come and give it our best shot.”

The leap from Junior 1000 competition will be a big step for the Northern Irishman, but there is no question the young-gun is brimming with potential after notching-up ninth overall on the New Year Stages Rally in his first outing in the French pocket-rocket.

“We did the New Year Stages and what a huge learning curve from a one-litre standard rally car. The C2 is an outstanding thing to drive, a world of difference to what I am used to. However, I am under no illusion that I have an older-spec R2 car, so I wont be fighting for wins from the off. I want to set some decent times, learn the gravel and by the end of the year on Tarmac, be closer to the front and be showing some good times.”

The BRC runs in the family as Josh’s cousin, Desi Henry is one of the front-runners in the BRC1 category. McErlean hopes to tap into Desi’s knowledge gained from the series last year.

“Desi Henry is my cousin so has always been around. He is a great help and has so much knowledge. I will be feeding off as much as I can as he did the series last year.

“This is my first proper year rallying so the whole going across the water to compete is really exciting. Ypres, Ulster and Isle of Man are all legendary events and will be a huge challenge. I can’t wait to get my teeth into the stages. Tarmac is my favored surface, so I will be taking it steady for the first few gravel rounds whilst building the confidence. I will get a bit of time in the car before the first round and we will be doing the Malcolm Wilson Rally so we can get used to the type of stages we will face.” 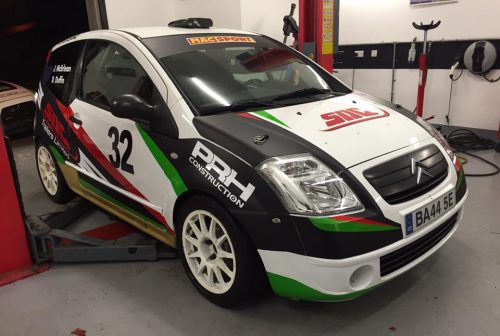