James Williams from Newcastle Emlyn will step-up into the British Rally Championship top-flight this season. The 21-year-old will drive a brand-new Proton Iriz R5 on the Visit Conwy Cambrian Rally this weekend.

Williams has become an established name in Britain’s premier rallying series, taking multiple Junior BRC podiums including two dominate wins in Ypres, Belgium – with his 2019 result elevating him to one of the country’s brightest rallying prospects.

“The last two years have been fairly successful in the JBRC and I felt like I have earned the right to move up. We could have had more success, okay, we won a few events, but we were unlucky to not win a few more. I am the most relaxed I have been for a number of years and the 2020 move is a natural progression for myself and the exciting Proton project.”

The University of Wales, Swansea student proved himself to be a giant-killer in his previous seasons in the BRC, as his front-wheel-drive exploits showed his talent behind the wheel – as he put plenty of R5 cars behind him on the results sheets. Now Williams joins the Malaysian manufacturer for the BRC curtain-raiser and is impressed with what he has seen so far.

“I have followed the Mellors Elliott Motorsport team quite intently the past few seasons and I am delighted to be able to have the opportunity to show what the Iriz R5 can do on the stages and I hope we can give them a good result on the Cambrian – our home BRC round. I am delighted to have HT Installations back on my car again this year. This is a big thing for me as they have supported me from a young age. I’m fortunate to also have further local support too from Cambrian Training and as a young Welsh driver I am looking forward to representing them on their home round.”

With the deal in place, how does the new Iriz stack up against the established opposition?

“I have driven the R5 Fiesta and the Hyundai during a BRC test which was a great experience, so I had a benchmark in the soil so I could see where the Iriz matched-up against the others. I was very surprised with the package from Proton. Factory driver Ollie Mellors has proved on BTRDA events that the car is very competitive, and I hope we can replicate that and if the opportunity arises, I want to continue this beyond the first round as I am very excited by the project.”

“I really like the stages, they are real classics. When I was 17, I drove them in my Ford KA and did well. Since then, apart from 2018, I don’t seem to have had the luck on the event. In 2018 we won the R2 class despite never having driven the car, it had just rolled out of the workshop. I hope history can repeat itself this weekend!”

The 2020 British Rally Championship is set to be one of the most eagerly anticipated in recent memory and James is ready to take the fight to the household names.

“This year the entry is full of quality. If all the names stay for the whole season, its going to be a classic for the BRC. I don’t have any pressure on my shoulders compared to some of the other drivers, so I want to get my feet under the top table and not expect anything too much from the get go. It is a bit weird to be in the same class as Osian [Pryce] and Tom [Cave] – drivers I looked up to when I was in my little Ford KA, but actually now I want to see how I get on against them and stablemate Ollie Mellors and reduce that gap to them with every mile.”

Helping Williams every step of the way will be his co-driver and fellow countryman Dai Roberts, a man with experience under his belt from all over the world.

“With the step into a R5 car, Dai [Roberts] was a natural choice as we have a lot in common. We have the same attitude as we both want to win – whatever the cost. We may not have the biggest budget, but we have the biggest hearts and the biggest aspirations. I might be stepping-up, but I don’t have the fear factor, as we want to show we deserve to be at the sharp-end and we are ready to turn over some big names this season.” 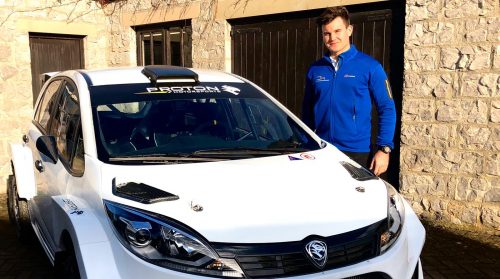