With a host of drivers from all corners of Europe already signed up to compete it is sure to be a tough contest from the word go.

The first round is the Visit Conwy Cambrian Rally in North Wales, this event uses gravel stages from World Rally Championship event Wales Rally GB  and is sure to be a test for man and machine. The second round is hosted on Tarmac over two days in West Cork in mid-March. With other rounds in Essex, Belgium, Northern Ireland and Scotland at the back end of 2020.

On speaking with Kelly he noted the competition will be fierce but he is going to try gather as much experience as possible. “The BRC is a fantastic championship! If you want competition, this is the place to get it. With the series being open to only Ford Fiesta R2 cars it will make it even for everyone”

The winner of the championship is eligible for €60,000 towards a drive in the World Rally Championship in 2021. Kelly also hopes to compete is a number of events in Ireland during the year.

David is also in the 2020 MI Rally Academy which will be a huge help for him in progressing his ability. “I was at the first academy day on Saturday. It was a huge help, they coached us in relation to progressing our fitness, carried out a fitness test, gave us a plan on improving our diets pre and post rally and also networking with the media on and offline. The team have put in fantastic work and have prepared a fantastic programme for the MI Rally Academy in 2020. It’s a credit to the programme co-ordinator Sean McHugh and his team”

For now Kelly is focusing on getting some testing in the car ahead of the first round on the 8th of February. He noted that without the support of his sponsors none of this would be possible. 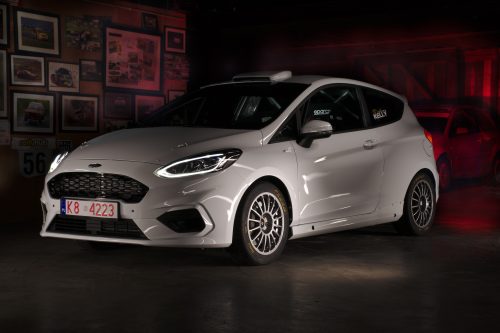