Irish driver Joseph McGonigle will return to the Motorsport UK British Rally Championship for the first time in seven years as he launches an assault on the 2021 series behind the wheel of a Ford Fiesta Rally2.

The 38 year old has an established history with the British Championship, starting in a Honda Civic in 2008 before moving on to a Citroen C2 R2 MAX. His last attempt came in 2013, driving a Renault Clio R3 when the series ran as a two-wheel-drive only championship, a seventh overall at the RSAC Scottish Rally marking a season highlight.

The popular Co. Donegal driver will return to the BRC top-flight in a McGeehan Motorsport run new-shape Ford with regular co-driver Ciaran Geaney alongside. The long-term pairing will enter the BRC1 class and will fight for overall title honours throughout the seven-round season and McGonigle was drawn back to the championship thanks to its format in 2021.

“The 2021 British Rally Championship calendar is the reason we are coming back, to be honest,” says McGonigle

It feels to me like a British Championship again with a great spread of events. It also has normal rallies that are achievable for most people thanks to the limited time away. [They are] all good British based events and that has a real draw to me at the moment”.

The acquisition of a Skoda Fabia S2000 in late 2014 heralded a shift from two to four-wheel-drive for McGonigle and with it, a six-year campaign in a variety of machinery including a Mini Countryman WRC on sealed surface events in Ireland. “The Clio was a great wee car but all I remember about rallying on gravel with it was spending three days spinning the wheels on Wales Rally GB back in 2013,” he says.

“The S2000 Fabia that I bought after that didn’t have a gravel kit and neither did the R5 so I stayed on Tarmac back home. I just couldn’t justify spending the twenty grand’ or so on a gravel kit for each car after that really.”

But the purchase of M-Sport’s latest Rally2 charger for 2020 re-ignited his passion for gravel.

“The Fiesta had a gravel kit and the M-Sport Return to Rally Stages was pretty much the only rally last year so we entered, not sure of what to expect. I got in it and was blown away and thought, I`ve got to do more of this”.

The BRC calendar features four gravel rounds and three asphalt, visiting each of the four home nations during the season. McGonigle remains realistic about his expectations for his first BRC tour in the current era.

“We had a really good run in Greystoke [Return to Rally Stages] and set some encouraging times against some real gravel experts. I think we even had a top-three time that day to finish sixth overall but I’m afraid to read too much into that. I`m sure the top BRC guys are going to be a step on from that pace so it will be interesting to see how we go on both surfaces. I`m looking forward to getting back in the series again”. 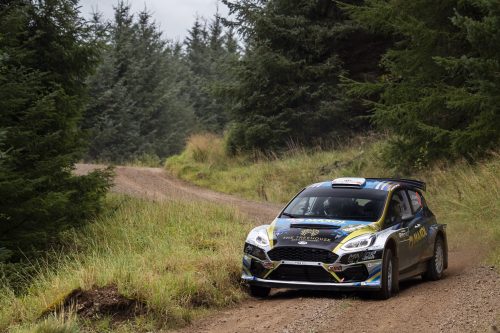