Into the woods for the BRC

A new season, and a new challenge awaits the British Rally Championship crews as the 2019 curtain-raiser is finally upon us, with the Visit Conwy Cambrian Rally providing an exciting first encounter of the campaign.

The popular one-day Llandudno-based event offers up some of the best gravel stages in the world and will be a new rally for the BRC in 2019. Classic stages like Clocaenog, Elsi and Alwen are favourites on Wales Rally GB and now become the gauntlet, as the cast from Britain’s premier rallying series goes head-to-head and against the clock over 53 competitive miles.

Leading the BRC runners away will be defending champion Matt Edwards and new co-driver Patrick Walsh. The M-Sport pairing will be on home soil and the event is extra-special for Edwards as the stages are just a stone’s throw away from his home in Llandudno. Matt will be keen to have a strong showing at home to launch his title defence.

“There is always the pressure of competing at home,” explained Edwards. “I felt it a little bit on Rally GB last year, but the Cambrian will be the big one for me. It’s the event I would dearly love to win. Of course I will be thinking of the title again, so I would be happy with a top three to get the year up and running. It’s great to see the Cambrian as part of the BRC. I remember when the Vauxhall Rally of Wales came here, and it’s great to see the event go back to that sort of scale again. It’s going to be a brilliant way to kick-start a great calendar for the BRC.”

Whilst Edwards is keen to get off on the right foot, several drivers will be hoping to spoil his homecoming as they prepare to lock horns and do battle on the slippery Welsh gravel. 2011 Champion David Bogie in his Skoda Fabia R5 took the fight to Edwards last season and won on the Welshman’s home patch. Along with co-driver John Rowan, the ‘Flying Scotsman’ will be pushing for a good start so he can be in title contention come his home round at the end of the year.

Joining Edwards in the M-Sport team once again will be Alex Laffey and new navigator Stuart Loudon in a sister Fiesta R5. Laffey finished runner-up to Edwards in the standings last year and will be vying for a podium on the Cambrian to add to his first one – achieved in the 2018 season finale.

Making a welcome comeback to one of the most competitive national rally championships in the world is the rapid Tom Cave with new co-driver Dale Bowen. The Welshman is another keen to shine on his home event as he brings the Hyundai i20 R5 back to the BRC. Cave finished runner-up to Elfyn Evans in the 2016 series and will be pushing for one better this campaign. Another Welshman Meirion Evans with Jonathan Jackson alongside managed to sort a last minute deal to drive in the top flight with another Hyundai i20 R5 swelling the ranks.

The entertaining Marty McCormack returns to the BRC top flight, with Barney Mitchell sat alongside as he goes in search of another BRC podium. The Irishman is no stranger to the rostrum and has led BRC events previously – he will desperately want to break his victory duck in his Fabia R5. The same can be said for countrymen Desi Henry/Liam Moynihan (Fabia R5) as well as Jonny Greer and Scottish co-driver Kirsty Riddick (Fiesta R5), who both return for a full campaign and can never be discounted from a top three on the timesheets.

One man who knows what it takes to climb onto the top step of a BRC podium is Josh Moffett. After a two-year absence, the reigning Irish Tarmac Rally Champion is fired-up to add the BRC title to his impressive rallying CV. He is joined in the Fiesta R5 by Keith Moriarty, who successfully guided Callum Devine to the Junior BRC title in 2017.

Englishman Tom Preston will pilot his Fabia R5 for a fourth consecutive year in the BRC with Andrew Roughead on the notes, while Sacha Kakad and James Aldridge – who dipped their toe into the BRC water last season – will like Preston be hoping for a busier campaign as they both vie for a top five finish on the Cambrian Rally.

2019 will welcome several new recruits into the BRC 1 category – home to the exciting R5, four-wheel-drive turbocharged hot hatches. Enda McCormack and Paul Sheridan (Fiesta R5) will hope for the luck of the Irish as they will be wanting to put in a strong showing in North Wales.

Northern Irishman Alan Carmichael will bring the first right-hand-drive Hyundai i20 R5 into the BRC as he tackles his first Cambrian Rally. Carmichael will be pushing for a top five to get his season up and running and will be expertly guided by Welsh girl Claire Williams in co-driver’s seat.

The explosive Junior British Rally Championship for drivers in front-wheel-drive R2 cars returns with a whole host of talented stars under the age of 26.

Welshman James Williams came runner-up in the 2018 title bout and will have the target well and truly on his back as he looks to become the first British driver to clinch the JBRC crown since WRC star Gus Greensmith took the honours in 2014. William Creighton, runner-up in 2017 is another man who will be pushing for glory as he hopes to take the title back to Northern Ireland at the end of the year in his Peugeot 208 R2.

The same model took Steve Rokland to JBRC laurels last season, and the French machine is a popular choice once again. Peugeot UK, with the support of Peugeot Sport and Total, are offering a prize fund totalling £24,000 for competitors who drive a 208 R2 in the Junior British Rally Championship  in 2019, adding another carrot at the end of the stages for the Junior drivers.

Reigning Ladies Champion Nabila Tejpar returns to defend her title, while Josh McErlean has switched over the closed season from a Fiesta to a 208 as he guns for his first JBRC win.

Marty Gallagher is a JBRC round winner and will hope to put the bad luck from 2018 behind him as he plans a title tilt this season. James Wilson, another 208 R2 runner stepped onto the podium on his second event in the BRC last year and the Billy Coleman Award winner is aiming for victories this season.

Scott Sloan will make his BRC bow on the Cambrian Rally in his 208, while Jordan Hone will be doing the same in his Opel ADAM R2 – the same car that took the JBRC title in 2017 with Callum Devine at the helm.

New for 2019 in the Junior BRC is a prize for the Ford Fiesta runners. The top R2T competitor will get €60,000 from M-Sport and Pirelli to put towards a season in the Junior WRC in 2020. The hotly-contested class will see 2018 Cadet Cup champion Jordan Reynolds go toe-to-toe with Finlay Retson, Bart Lang and James McDiarmid for glory.

Defending National Rally Cup champion John Morrison returns to action in the big Mitsubishi Evo 9 as he strives for a strong finish in the overall event. 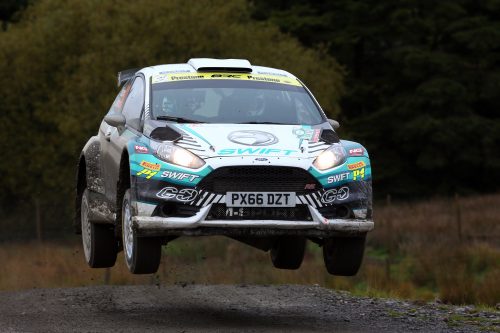