European Rally Championship Under 27 leaders Chris Ingram and Elliott Edmondson displayed a dominant performance in their Opel Vauxhall ADAM R2 before retiring on the 18th stage of the gruelling 260 kilometre, 20-stage Ypres Rally.

Network Q backed the Brits in their Union flag liveried ADAM R2 and the English pair literally flew through the classic Flanders fields stages and climbed up to 6th position overall in the Prestone MSA British Rally Championship standings amongst the more powerful four-wheel drive R5 cars, in-front of a huge following of British and European fans that took the trip to Belgium.

Chris made a cautious start, assessing the Belgian and British opposition and, at the same time setting up the car and learning his new Michelin tyres. Ingram took control of the R2 class to give the Network Q Opel a 18.4s lead over the Belgian Peugeot of Guillaume De Mevius and a commanding lead in the Junior BRC at the overnight halt.

On Day 2 of the event, one of the longest days of any European rally, Ingram controlled the class lead holding a 31.9s lead at the mid-day service despite coming to a stop for several seconds on SS11 Zillebeke whilst passionate spectators recovered a Skoda R5 running prior to Chris back on to the road.

The second run through the Zillebeke stage, which is an area particularly synonymous with the first world war as It passes directly next to trenches, was set to be Chris’s final fastest stage time of the weekend as a gravelly corner on the following stage (18. Reninge) caused the 22-year-old to slide off the road and become lodged in one of Ypres infamous ditches.

Chris commented after the event “We were delighted with the ADAM’s performance running at the front of this prestigious event for over 200 kilometres. Because this was a new team partnership it was critical that we gained the credibility of a team that could set giant killing performances and Team Network Q and all of our supporters were thrilled that we were the leading two wheel drive car, and so excited that our little Adam was beating the mass majority of four-wheel-drive cars that started.

“The event was a one off to prove the value of marketing within the British Rally Championship and to receive the confirmation that Network Q have confirmed their agreement for myself and Elliott to be working for them as ambassadors for 2017, is the best news we could have hoped for. My immediate focus is to win the European Junior Rally Championship and ERC Team’s championship for Opel but I am now confident that Team Network Q will be seen on UK soil before the end of the year.

“The level of competition from both the British Rally Championship Juniors and the local Belgian R2 heroes was just incredible and the standard of the event organisation was faultless – it really adds a dimension to the British Rally Championship which really increases its attraction. Of course I was a little disappointed at the time to make a mistake so close to the finish however all-in-all it has been a fantastic event and we achieved all the performance and development targets we set – apart from us getting our 4th tarmac win in a row! I really have to thank Vauxhall Network Q and Opel Motorsport for providing the opportunity and also to my personal sponsors and the many, many supporters who came to cheer us on”

“We were delighted to welcome Network Q into the BRC as a preparation partner at the start of the year and it was exciting to see them enter a team into Ypres,” enthused BRC Championship Manager Iain Campbell.

“It was a real coup to see Junior ERC frontrunners Chris Ingram and Elliott Edmondson return to the BRC. They offered a really competitive benchmark for our Junior crews to go toe-to-toe with. Which our regulars did, giving us our fourth different Junior winner in four events.  The pace was phenomenal all weekend and it was a shame to see Chris and Elliott retire from the event with just one stage to go. We hope the BRC bug has bitten for Chris, Elliott and Network Q as we would love to see them return to the championship before the year is out.”

Network Q have agreed support to Chris and Elliott for the remainder of their campaign in the European Rally Championship with Opel Motorsport’s Factory Junior Team. The Brits lead both ERC3 and the Under 27 Junior categories from two wins out of two in the Azores and Gran Canaria. The next round of the ERC is Poland’s Rally Rzeszow starting on the 3rd of August. 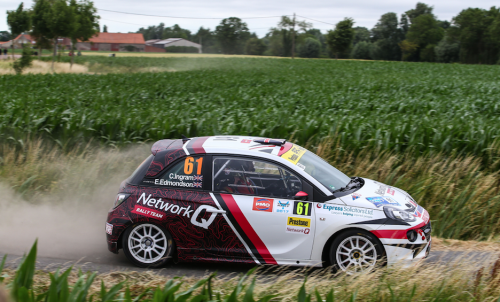