Chris Ingram is the latest star driver to join the Prestone MSA British Rally Championship with the English young-gun representing Network Q in an Opel ADAM R2 for this weekends Ypres Rally (23/24 June).

Ingram is using the lull in the FIA European Championship to join one of the world’s best national rallying series with Opel Rallye Junior Team preparing the rapid ADAM R2 for Chris and co-driver Elliott Edmondson to use in the Prestone Motorsport News Junior BRC.

The 2016 European Two-wheel-drive champion is no stranger to Britain’s premier rally series as the 22-year-old campaigned a Renault Twingo R2 in 2012 and 2013. After a four-year absence, Ingram is relishing the chance to compete in the BRC once again.

“I am pleased to be back in the BRC,” explained Ingram. “When I was last in the British Championship I was in the deep-end. I was 17 and had a mixed run, a few crashes, but I won the Renault Cup, which created some fantastic opportunities.

“I am looking forward to joining the fray again and being a part of the new-look championship, with more experience under my belt this time. I may have done the ERC for the last few years but I have had my eye on a BRC return for a while. I think I may have gone off the radar because of it, but now I want to prove to the British fans that I’m here and ready to prove my worth.”

Ingram’s BRC wildcard return will certainly put the cat amongst the pigeons as Chris’ experience of the Belgian roads would surely make him one of the favourites for the junior category win this weekend.

“Ypres is an incredible event. It looks straightforward on a map but it’s the recce where this event is won and lost. It’s all about finding the cuts, looking for the surface changes and where you can make up time.

“There are a lot of stages and a lot of mileage making it tough on drivers and cars. The atmosphere on the stages and in the service park is immense and I think it’s one of the best events in mainland Europe.”

The Junior BRC regulars will revel in the chance to fight against a European front-runner.

“I want to try and win of course but there is more to the event for me than that. We are launching an exciting new partnership with Network Q. It’s also my first proper run on Tarmac so will be a great experience ahead of the ERC rounds coming up.

“It will be good to compete against Callum Devine again as well as some of the guys I used to rally against in the Junior 1000 series like Meirion Evans and Cameron Davies. There are so many quick guys who want a good result form this event so the challenge is going to be an exiting one.”

The fourth round of the Prestone MSA British Rally Championship gets underway on Friday afternoon with the rally finishing late into the night on Saturday evening. 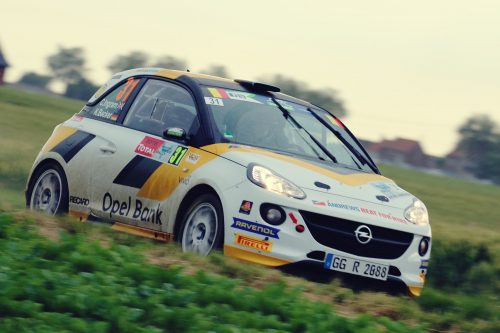