Skoda Fabia R5 pilot, Marty McCormack hasn’t been behind the wheel of his Czech rocket since he stepped out to receive the podium champagne on the John Mulholland Motors Ulster Rally last August.

So what is the reason behind his lack of seat time and will this effect his upcoming Prestone MSA British Rally Championship campaign?

Marty works for his family business, McCormack Drilling.  A company whose business is in delivering major infrastructure projects for utility companies, when we say ‘major infrastructure’ we mean it.  The jobs they take on can mean drilling down to depths of up to 100metres and up to a kilometre in length.  Recent projects have been to lay cables underneath the likes of the River Thames in London and in Listowel, Co Kerry.  Getting pipes or cables under motorways is another common project for the team.

Knowing just what type of surface you are drilling through is critical to all projects. What is also critical is how to get rid of the drill waste from the hole, and when the point of the drill could be 100m down and 1 kilometre away, this is a very scientific process.

In contrast these decisions are quite similar to knowing the surface your about to rally on as the critical car set-up and tyre choices made on different events for each surface are scientific in their own right.

Retrieving the cuttings back to the surface requires a hydraulic fluid to be mixed accurately with water. This mix depends on the density of the cuttings coming back and the amount of fluid being circulated can run to 3,000 litres per minute.  That is an enormous amount of pressure!

However the pressure doesn’t get left behind at the workplace. It follows through into the rally preperation by making sure the recce of the stages are done right in order to have full commitment when it turns to race day.

At 200 tonne for each machine, moving these monstrous drilling machines is not the work of a moment.  It can take up to nine trucks to move the hardware between jobs.  Each of the drill rods are too heavy to be on just one lorry, so they have to be split up.

The jobs take maximum concentration and create a lot of pressure for the operators as well as in the ground. Marty’s way of relaxing is in taking the rally car out and getting the maximum out of that. With three podiums and a series of fastest stage times in 2017, what is his aim for this year?

“I’m going to do the Easter Stages this weekend just to get myself back into the car and up to speed.  A result is not really the priority and then we will look to get some time on gravel before the Pirelli International Rally at the end of the month.  We have our own goals for the Pirelli and reckon that a podium is on the cards.  We’ve always gone well there.”

“Some of our competitors are putting a lot of time into their preparation for the championship and I can’t do that with the business being so busy.  But we should be strong.  Ypres owes me big time after last year.  Our lead up to the rally didn’t go that brilliantly and then the crash was a big one, so that is somewhere I plan to have a really good result.”

“I actually haven’t done that much on asphalt.  I may be from the side of the water that is better known for tarmac rallying but the BRC is the championship I have my most experience in. However, I am looking forward to the Ulster Rally returning to the Antrim coast, these stages are class.”

Look out for the Tiger Risk Skoda Fabia R5 on the stages this year.  And if you need to know about the viscosity of hydraulic fluid to water for drilling through clay or rock – Marty is your man. 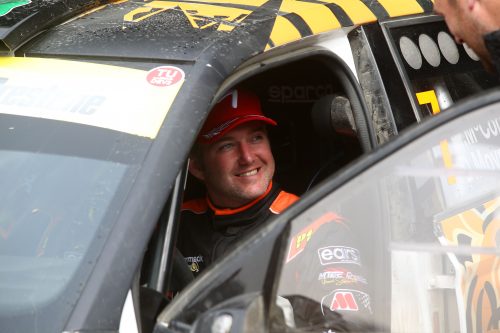