A group of automotive and agricultural engineering students got together in 2013, possibly over some pints in the student bar, and started talking about going rallying. Unlike many discussions that start with a pint, this one came to fruition and the students formed Harper Adams Motorsport.

After preparing an old VW Golf GTi rally car, they headed to their first event; a gravel time trial on the Isle of Mull. It didn’t go completely to plan, with the car ending up parked in a ditch. Ambition and ability had got mixed up. Without getting disheartened, the team headed back home, fixed the car up, and went on to contest a range of single venue events with the car. While the results weren’t always show stopping, they gained invaluable experience in running and setting up the car.

During 2015, the team had an idea to approach the UK based FIA World Rally Championship winning team M-Sport for support. While they were certainly aiming high with their ambitions, Rich Millener saw potential in supporting the students, seeing an opportunity for M-Sport to work with engineering students that may, in the future, go on to work for the company. There were numerous visits to Dovenby Hall to visit the fantastic facility and bring discussions to a head.

The students were called to a meeting with Malcolm Wilson during 2016 where they outlined their plans for contesting the 2017 Prestone MSA British Rally Championship. M-Sport lent them a road going Fiesta donor car and the kit required to upgrade the car to a R2 National specification, on the condition the University built it themselves.

The students stripped the car down and the bare shell sent it to Harry Hockley Motorsport to have the roll-cage installed and the shell painted. Once the shell came back, the team installed the rest of the components to make the car ready to rally. This experience proved invaluable for looking after the car on event, as the team then had an in-depth knowledge of the car’s inner workings.

The core members of the rally team number around 10 but on event this can grow up to 25. Each person is allocated their own tasks e.g. one doing logistics and movement schedules; another organising the vehicles and equipment that will be needed on event; and one organising the service on car during events.

James McDiarmid, who drove the Fiesta R2 National car in 2017, explains that the car was still ‘wet’ when it arrived at the first round of the Championship in Jedburgh. “We were short of ‘running in’ mileage and actually needed the first road section to take the engine just over the required mileage to have it ready to rally. That event was a real baptism of fire as everything was new to us. We discovered that we had over engineered some things and neglected others. All part of the learning curve, that was to continue throughout the year.

“The rest of the BRC season was full of learning and a great experience for us as a team. We learnt so much about not just driving the car, but keeping it rally-ready, getting the team from the University to each event and even keeping us all fed. Brilliant experiences.

“There were a lot of high and lows throughout the year, the lowest low must have been on the Nicky Grist Stages where blown piston rings stopped us from taking a probable Cadet BRC class victory. Getting that class win on 138.com Rally Isle of Man made it all worth it though.”

“Finishing everything off by getting to contest our home WRC event, Dayinsure Wales Rally GB really completed a fantastic year for us.”

In November the Harper Adams Motorsport team went back ‘cap in hand’ to Malcolm Wilson, asking if they could not only compete in the car for another year, but to upgrade the car to R2T specification. The result? The team entered in for the Prestone Motorsport News MSA Junior BRC Championship for the 2018 season and some goals to explore a couple of World Rally Championship rounds as well.

Another year of rallying education that just adds to their University experience and career prospects.

Make sure to keep an eye out for the team on the stages, and in the service park! 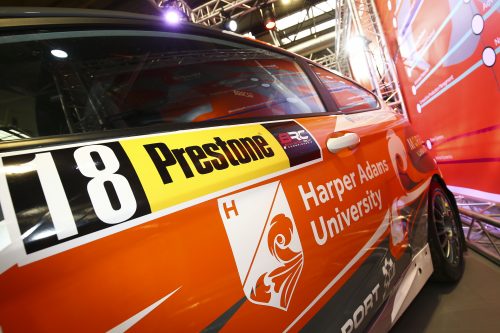