Living up to its reputation as one of the world’s premier national series, the Prestone British Rally Championship welcomes yet another new marque to its ranks in Cumbria.

Having finished a strong second rallying a familiar Fiesta R5 in the opening round, Tom Cave is now switching to one of Hyundai’s latest i20 R5s for this weekend’s Pirelli International Rally.

Though new to the BRC, the promising i20 R5 has shown plenty of pace among the WRC2 entries in several rounds of the World Rally Championship and, in Cave’s capable hands, could cause more than a few surprises here in Britain.

Hyundai Motorsport certainly expecting Cave to be among the front-runners right from the off – indeed, it has registered to score points in the BRC Manufacturers’ Championship.

“Having a New Generation i20 R5 competing in the British Rally Championship for the first time at the Pirelli International Rally should make for an interesting weekend,” confirmed Hyundai Motorsport Customer Racing manager Andrea Adamo. “The BRC is already a very competitive series, and the first entry by a driver with an i20 R5 adds another element to the championship. A strong performance this weekend can show the strength of the car to a wide audience.

He continued: “Tom Cave has had a good start to the season with second on the Border Counties Rally. Customer Racing engineers from Hyundai Motorsport will be assisting him and his team throughout the weekend so that he can get the best performance from the car and take a strong result from the rally.”

To that end, Cave is already busy putting his new yet-to-be-liveried Korean stead through its paces in an extensive pre-event test in the fearsome Kielder Forest.

Such preparations are sure to put the i20 newcomer among this weekend’s pacesetters and a famous debut win is a very real possibility. One thing’s for sure: many eyes will be following the fortunes of Cave and the Welshman’s exciting new Hyundai 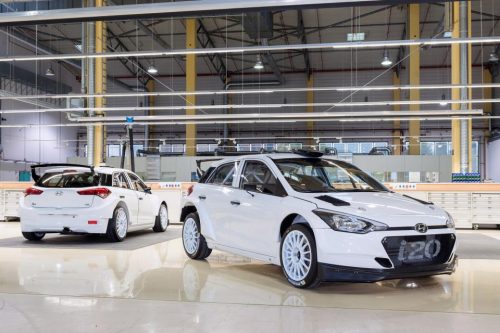