The 20-year-old wrapped-up the JBRC title with a round to spare this season, after wins on the West Cork, Pirelli and Ulster rallies in his Peugeot 208 R2. Now the Northern Irishman will be able to showcase his talent on the world stage, at the helm of a four-wheel-drive R5 car – his prize from Germany-based Hyundai Motorsport for winning the Junior British Rally Championship title.

McErlean will contest his first WRC event in the BRC-backed Hyundai, and guiding him through four-days of Welsh forestry action will be regular co-driver Keaton Williams. The pair will also be supported on the event by Pirelli UK, Rally Cover, Carless Racing Fuels, Melvyn Evans Motorsport and Motorsport UK.

“It’s only just starting to sink in,” grinned McErlean. “To win the title on home soil on my home event was just amazing – when you look at the caliber of drivers in the series, it was some achievement.  It was a tough year – to be fair all years have been tough but, on the Cambrian Rally, when there are tenths of seconds between five, six drivers you know it’s going to be a real fight for it.”

McErlean joins an illustrious group of former Junior BRC champions including Kris Meeke and Gus Greensmith, who after their title winning exploits in Britain’s premier rallying series are now fighting at the very front of the FIA World Rally Championship.

“It’s very special, I really hold the BRC in high regard and to win a British title is something very special to me. To join the likes of Kris and Gus – drivers who are excelling at the top level in the WRC is quite something. I didn’t think it would be possible and now the chance to drive an R5 car on a WRC event is something I am going to grab with both hands.”

As well as learning a new team and car, the Northern Irishman will contest the legendary Wales Rally GB for the first time – one of the longest running events on the World Championship calendar – an exciting prospect for the Mechanical Engineering student.

“The Welsh forests are out of this world and after sampling them on the Cambrian Rally [Opening round of the BRC] I can’t wait to do more of them. They are just brilliant to drive.

“I haven’t driven the Hyundai i20 R5 car in anger so there will be a lot to learn, as we get thrown into the deep end. It won’t just be the car, I have never done a WRC rally so I am equally excited for my first event and where better to get started than Wales Rally GB. Keaton [Williams] has done the event before so that will be a massive help, but after a few seasons in the BRC, I am ready to take on the challenge. With a good recce, plenty of preparation beforehand, we will be in good shape to give the event our best shot!

“I have to thank the BRC and Hyundai Motorsport for the support – an amazing opportunity for a young driver like myself. I do have to pinch myself and I can’t wait for October.”

“We are extremely happy to be working with Josh and Keaton for their entry at Wales Rally GB. Their pace together in the Junior championship has consistently been excellent and it’s going to be very interesting what they can do in a four-wheel-drive car for the first time. Running a car with one of our customer teams, they will be able to call on their expertise, as well as that of support engineers from Hyundai Motorsport so they can get the best out of the Hyundai i20 R5 and their time at the rally.”

“I am extremely pleased to see Josh and Keaton stepping into a Hyundai i20 R5 car on Wales Rally GB. The pair have excelled this season in the Junior BRC and have worked tirelessly to put a strong campaign together all year. The BRC has always been about progressing young talent and providing career changing opportunities so we are pleased to be able to offer this amazing prize and chance to sample a World Championship event. We are delighted that this amazing prize has come to fruition and I would like to thank Hyundai Motorsport and all our other supporters for working with us to give future stars a chance to shine on the world stage.”

After the announcement of the 2020 calendar on the 4 September, further news regarding next season will be announced in due course, but in the meantime, the 2019 championship continues this week with the Armstrong Galloway Hills Rally (14 September) as the crews tackle the one-day showdown on the legendary Scottish forestry stages

Keep tabs on all the latest BRC developments by visiting www.britishrallychampionship.com or by following us on social media: @BRCRally on Facebook, Instagram and Twitter using #BRC 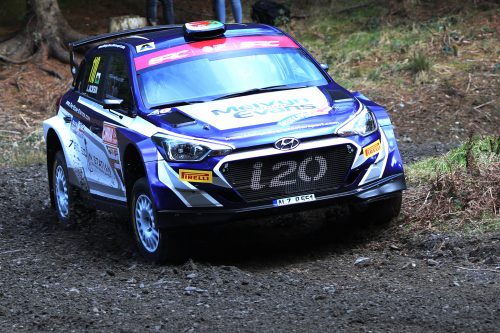