Irishman Kevin Horgan will contest the Prestone MSA British Rally Championship this season in a Skoda Fabia R2, with Liam Fouhy in the co-driver’s seat.

Twenty-six-year-old Horgan is the latest driver set to contest Britain’s premier rallying series, with the Cork-based ace looking to make an impact in his first campaign in the championship.

“Two years ago, I won the Irish Tarmac Junior series and I did bits and pieces last year and looked at the BRC from afar. 2018 would be my last opportunity to compete in the Juniors and watching Marty [Gallagher], Callum [Devine] and William [Creighton] made me see how fun and competitive it was. I just wanted to get involved and take on a new experience. The events are a major draw and they all offer something different. I am looking forward to Ypres and Wales Rally GB – to compete on a European and WRC event will be like a dream come true.”

As Horgan prepares to tackle the Junior BRC, the competition is set to be intense once again with a high-calibre collection of drivers – making it one of the most competitive junior series in the world.

“This will be my first time doing the BRC and competing at this level in Britain. We are confident of a good showing but we have to be realistic – some of the guys have a year on us in terms of experience. We want to be scoring solidly on every round and if we are there or thereabouts come the Isle of Man and Wales Rally GB, who knows what can happen. Either way, I am looking forward to the challenge!”

With the Skoda marque joining the Junior BRC, the Czech machine is due to make an impact on Britain’s stages with Horgan at the wheel.

“I am looking forward to bringing the Skoda R2 to the BRC. It’s nice to have something different. A friend said the car was available and the idea of the BRC came up, so it was a case of why not! I haven’t driven the car yet as we are waiting for some suspension components. Once that is all together, we plan to do a round of the Irish Tarmac or Forestry Championship. Failing that, a few days’ testing before the Border Counties will get us ready for the start of the season. I am looking forward to it and to showing off our final livery. It will certainly be eye-catching.

“I would like to thank Woodford Trailers, Eurol Lubricants, Automania, Brickfield Construction, Acesigns, Alan Gordon Engineering, HRX Motorsport, Ears Motorsport and E.Tarrant & Sons Skoda for their continued support and I look forward to working with them in 2018.” 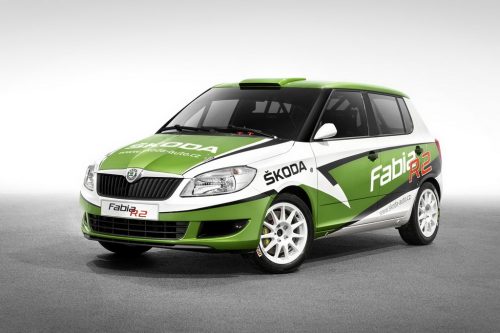