Hone, from Derry in Ireland, has shown impressive pace on both rounds of the series so far despite being behind the wheel of an ageing Open Adam R2. The 2018 Motorsport Ireland Billy Coleman Young Rally Driver Award nominee will switch to the all-new Fiesta R2 for the single day gravel rally in Kielder Forest along the Scottish Borders.

Official M-Sport re-sellers EDSL Sport have been responsible for introducing the 2019 Fiesta to the UK and have been working hard to adapt the machine to both the British forests and the bumpy Irish asphalt over the past few months. Ruairi Bell and current British Rally Champion co-driver Darren Garrod have shown impressive pace on their BRC debut this season, giving the Fiesta its first fastest Junior time overall at last month’s West Cork Rally.

Now, Bell will be joined by Hone and co-driver Aileen Kelly for the unforgiving gravel tracks in Kielder and the Irishman is looking forward to his first drive of the modern specification Fiesta R2.

“I`m certainly looking forward to the challenge this weekend,” he says.

“I haven’t had the opportunity to drive the new generation R2’s yet but we have a test planned this week and the 1.0 Litre Turbo is going to require a different driving style to the older generation R2 like my Adam. It will be a challenge to get up to speed and comfortable with the new surroundings, but I’m confident that they are a good car and they’ve certainly shown their pace on first two rounds of the BRC this year. Hopefully, they can continue to do so more regularly at the Pirelli Rally!”

Hone has regularly been at the front of the Junior BRC battle this season, on both a gravel and asphalt surface. He was in second spot on the season-opening Cambrian Rally before being forced down to fifth in the dark. His pace was confirmed on the Tar, leading Junior after the opening day at West Cork before sliding off the road on the second.

The event will mark Hone’s first foray into the undulating and treacherous Kielder forests, and he doesn’t believe in pressuring himself into a result.

“We have to be realistic and not expect a result in our first time out in the car,” he says.

“It’s a new car, new stages and it is going to be pretty difficult for us to get a result compared to the other guys in the BRC Juniors class who have done these stages for the past two or three years. If we can be there or thereabouts with the rest in the class, and ultimately finish we’ll be happy.

The Pirelli Rally is the one I wanted to do the most as it’s such an iconic rally associated with the British Rally Championship, so I wasn’t going to miss the chance to do the rally after our accident on the West Cork. Hopefully, Aileen and I can have a good recce to allow us to make good pacenotes and make learning a new car on new stages slightly easier. From then on, we’ll just build our pace up as the day goes on and hopefully, we can make it to the end with some valuable points.”

Team Manager Alex Waterman is delighted to welcome Hone to the team and is eager to see how the weekend pans out for the EDSL Sport squad.

“It’s fantastic to see Jordan wanting to fight for the Junior BRC in one of our Fiesta’s and after his performances so far this season, I believe he is the perfect fit for the car,” he says.

“There is no doubt that he has the pace to be fighting at the front of the Junior category and we all know how rapid these youngsters are out there. There is certainly no pressure from me at all. We really want to see how he does and what feedback he can provide to us during the weekend. M-Sport will be providing an engineer for the test this weekend so we will see what we can dial-in to suit his driving style. We have a great team in Ruairi and Jordan so I’m` really looking forward to the Pirelli and seeing how our guys perform”.

Hone is eager to bag some valuable points for his Junior BRC campaign but admits he isn’t going just to make up the numbers.

“I’d love to say we will go flat out and say that ‘we are going to clean everyone’s clocks!’ he quipped.

“But for me, it’ll be more important to get to the finish and score some points, to ensure we can continue with the British Junior Championship. After our accident on the West Cork, we almost weren’t going to make it to the Pirelli due to the expense of the damages, but thanks to all my sponsors and EDSL Sport for giving me this opportunity, we’ve been able to do the deal and get to the rally.

With all the effort that it took for us to get here, it would be more important for Aileen and me to get to the finish and get some points so we can build some momentum and begin to think about latter half of the championship, and with that hopefully we can get some luck and get a result as I’m confident that we have the speed to do that.”

The Pirelli International Rally takes places on Saturday, with eight stages and over eighty miles of competitive action in the Kielder Forest complex near to the Carlisle base. 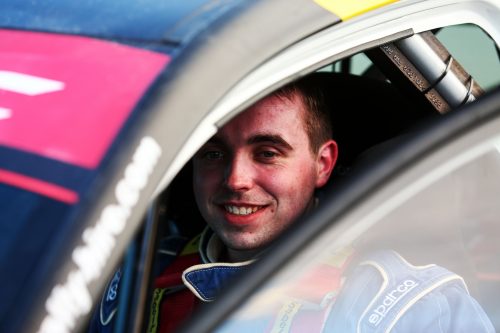