Keith Cronin and Mikie Galvin were the top Prestone MSA British Rally Championship crew on the legendary Ypres Rally – the championship’s first overseas round in its 59-year history.

The Irish pairing expertly guided their M-Sport Ford Fiesta R5 to victory on the fourth round of the BRC and mixed it with the best in Europe, finishing an impressive sixth in the overall event. WRC star Kevin Abbring and local co-driver Pieter Tsjoen were the overall victors in their Peugeot 208 T16.

The classic Ypres Rally marked the crucial halfway point in Britain’s premier rallying series. The opening three events were played out on gravel and the Belgian event provided the first sealed-surface taster of the season with the Tarmac specialists expected to come to the fore.

Twenty demanding stages held in both daylight and darkness were centre stage as the historic venue played host to a festival-like atmosphere as the BRC show came to the Belgian city, with thousands of rally fans descending to take in the top-drawer action. To succeed in Flanders, bravery is key – and an eye for cuts. Cut corners too much, and you are heading for a puncture and an early bath. Don’t cut at all, though, and you risk skating around, losing ground on the mud and grass dragged out by your competitors.

Keith Cronin and Mikie Galvin stole the initial march in their DMACK-backed Fiesta R5. The Irish crew were at home on the Tarmac from the off and used their Evo2 upgrade on the Fiesta to good effect, stretching an early lead on the opening loop of stages.

The closest challenge came from Fredrik Ahlin and Torstien Eriksen (Skoda Fabia R5). The Scandinavians quickly found their feet on their less preferred surface and on the second loop began to reel in Cronin before overhauling him on Stage 7. Disaster struck for Ahlin a stage later, the final one of the first leg of the event. The Swede lost control of the Fabia R5, putting the Czech machine into one of the event’s notorious ditches. Ahlin’s CA1 Sport team recovered the car and enabled the Swedish star to restart the next day to gain crucial testing mileage and more importantly, the Swede clawed his way back up the leaderboard to finish sixth and collect crucial championship points, which may well prove crucial later in the season.

Cronin experienced his own drama when he visited a field. Thankfully, the multiple BRC champion recovered, losing minimal time in the process. Others weren’t so lucky. Marty McCormack/David Moyinhan (Fabia R5) have a great deal of experience in Ypres but even the best can be caught out as on Stage 2, the pair rolled the car out of the event.

Scotish Rally winner David Bogie and new co-driver Andrew Roughead were another big name to take an early bath as they too were to exit on Stage 2.

With the dust settling on the drama, Cronin was to lead the BRC section at the overnight halt ahead of Desi Henry/John Rowan (Fabia R5) and a charging Tom Cave and James Morgan in their striking Hyundai i20 R5.

The second day saw a change in weather with a temperature drop and light rain throughout the region. It was to be another challenging yet exciting day for the BRC crews.

Cronin showed why he is a three-time BRC champion as he meticulously danced his Fiesta through the cuts to stretch his margin to a over a minute, claiming his first BRC win since 2012 and lifting the Tony Pond Award for the highest placed BRC driver. The Trophy was presented by Pond’s co-driver Fred Gallagher at the ceremonial finish.

The first casualty on the second day was Tom Cave who had passed Henry on the opening test before the Hyundai came to a grinding halt at the end of Stage 10. Another heart-wrenching mechanical failure put Cave on the sidelines allowing Desi Henry to step up into second briefly, until he rolled his Fabia out of the event on Stage 14 – denying him his best BRC finish to date.

Waiting in the wings, ready to pounce was Matt Edwards and Darren Garrod in their Hankook tyre-shod Ford Fiesta R5. Edwards was only on his third Tarmac event in the car and was driving clean and tidy throughout the two days. His first fastest BRC stage time came on the opening day and his best BRC finish of second came on the final day with the Welsh duo delighted to take their first podium.

Osian Pryce and Dale Furniss (Fiesta R5) had a quiet event by their high standards. Ypres was a case of gaining confidence and the right set-up for the Spencer Sport crew. The Welsh duo can be very satisfied with their weekend work, netting third – continuing their run of podiums as they now lead the Championship coming into their home event. Jamie Anderson and Ross Whittock (Fiesta R5) enjoy the longer, tougher events and claimed their best BRC performance to date with a fine fourth. Rhys Yates and Carl Williamson in their Michelin-backed Fiesta R5 were delighted to reach the finish, rounding out the BRC top five and making it a clean sweep for the Ford Fiesta R5 up to that point in the classification.

The Prestone Motorsport News Junior BRC provided another glimpse of the stars of tomorrow. Callum Devine and Keith Moriarty in their Opel ADAM R2 were top of the timesheets after the opening stage, with Devine utilising his Ypres experience from last year to good effect.

Hot on the Irish crew’s heels were Chris Ingram and Elliott Edmondson. The English pairing were competing as a one-off in Britain’s premier rallying series in a Network Q-prepared Opel ADAM R2. Ingram was contesting his fifth Ypres Rally and

made use of his European Rally experience on the second stage by snatching the lead from Devine. However, he had to relinquish the lead on the fourth test back to Devine. That put the bit between the teeth of the 2016 European two-wheel-drive champion, as he scampered away to a healthy one-minute margin before he unfortunately rolled out of the event. A cruel blow to the Opel factory driver.

Devine had shown brilliant speed and traded times with Ingram at the top of the Junior standings. After coming so close to victory on the Pirelli Rally, he and Moriarty tasted the champagne at the spectacular ceremonial finish in Ypres and in the process made it four different winners from the first four rounds. The victory was made even sweeter for the young-gun as he lifted the Junior Tony Pond Award for the highest placed Junior BRC driver and recorded the first win for Kumho tyres in the BRC in 2017.

Championship leaders William Creighton and Liam Regan were keen to sample asphalt for the first time this season. With more experienced rivals visiting ditches and retiring, the Peugeot 208 R2 team were out to finish and haul more points towards their championship ambitions. The Irish pair didn’t have it easy as they were pushed all the way by James Williams and Dai Roberts. The Welsh partnership took their first podium and perhaps more impressively were the first Ford Fiesta R2T crew to the finish in Ypres.

The Cadet Cup for BRC drivers aged 25 and under was to be for many their toughest and most challenging event in their short rallying careers.

Josh Cornwell was the man on form coming to Belgium with three wins from three events. The Pirelli-supported driver with Richard Bliss calling the notes was once again unstoppable in the Ford Fiesta R2 – dominating the class and setting some respectable times that would have faired well in the Junior BRC category. With four straight wins, Cornwell and Bliss can almost put one hand on the inaugural Cadet Cup.

Tom Williams/Bryan Hull had a difficult opening day with gearbox gremlins working their way into their Fiesta R2. A full gearbox change on the Friday night enabled Williams to salvage a crucial second in class to help their championship ambitions. Alex Waterman with Michael Gilbey calling the notes flew over the Belgian roads and cobbles to record another podium position in the Cadet category.

David White along with son Matthew were the sole runners in BRC4 on the challenging roads around Ypres. The English duo love competing on the sealed-surface, however, on the opening day they visited a ditch in their Ford Fiesta R2. With the help of spectators, the father and son duo were able to continue to take their first class win of the year to put them ahead of World Mountain Bike Champion Gee Atherton.

In the National Rally Cup, John Morrison/Peter Carstairs were out to gather experience on the Belgian Tarmac in their immaculately prepared Mitsubishi Evo 6. The crew inherited the lead after initial trial blazer Donnie Macdonald went off the road on the first day of the event. Morrison took his second win of the season and stretched his command at the top of the NRC points standings.

Max Utting and Claire Williams made a welcome return to the BRC after missing the last round. The pair carefully threaded their Ford Fiesta ST through the Belgian lanes to take a welcome second place in class. Utting earns four extra points after playing his ‘Joker’ on this round.

Quotes from round four – Ypres Rally:

“It feels really good to win this tough event. We had a good fight with Fredrik [Ahlin] until he went off and when that happened, that changed the whole approach to the rally. I was very cautious and stayed in the middle of the road and we got the result. It’s such a famous rally and to get a good result is brilliant. The British championship’s visit here has been a success.

“Coming into this round, we thought we were out of the championship challenge but now we are in a fighting chance and things are looking better.”

“Wow, Ypres, that was incredible. Shakedown was my first go at Belgian roads and it was great to have Darren [Garrod] alongside me as has alot of experience which was massive. We set the car up at the start of the event and we didn’t touch it. We didn’t mess with it and I think that is the key – not to be bogged down in set-up.

“The fact that two and a half of the events coming up are Tarmac is a good thing. I have stayed in my own zone and I think it is my strongest performance mentally. This is a massive result for us and the team.”

“This event has gone from being a bit of a disaster to something very positive. It didn’t start well for us and to be honest we struggled for seventy per cent of it but the amount we have learnt is absolutely massive. It’s great to do such a massive event like this, with all the spectators and atmosphere. Plus, the level of competition is so high. Many haven’t made it and we are glad to be back at the finish.

“As the new boy in R5 cars, to be leading the championship is very special and I cannot wait for my home event in two weeks.”

(* = Joker nominations have been played. Rally Isle of Man is a double-header with two points-scoring opportunities. Every driver to drop two scores.)

The full results and championship points can be found at www.msabrc.com.

Keep tabs on all the latest BRC developments by visiting www.msabrc.com or following us on social media: Prestone MSA British Rally Championship on Facebook and @MSA_BRC on Twitter using #BRC 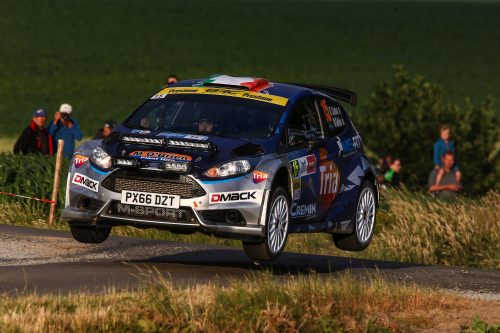