National rally driver Matthew Hirst converted his real rallying skills into the virtual world as the Leeds-based driver took the spoils on the opening round of the British Rally Championship Esports competition by just over six seconds on the popular Codemasters game DiRT Rally 2.0.

The four-round series which is open to any Motorsport UK licence holder or Trackside members, saw over 550 competitors register for the opening round as four tough stages through Wales provided the opening challenge. A variety of experience battled it out on the slippery Welsh gravel as those using PlayStation and XBOX controllers who were picking up the game for the first time, went up against experienced drivers and those with full simulator set-ups – with everyone driving the Ford Fiesta R2T in the game.

Topping the tree was 2019 Welsh Rally Champion Matthew Hirst who competes in a Mitsubishi Evo 9 on the real stages. The Yorkshireman adapted well to the front-wheel-drive Fiesta on the game as he topped the time sheets on three of the four stages – a stellar run that saw him take maximum points from the first round.

“Thoroughly enjoyed the opportunity to take part in my first British Championship event,” explained Hirst. “I pushed hard to get the result, spending time working on little details in an effort to get the set-up dialled in for both the wet and dry conditions throughout the event. I must confess that I made a bit of a rookie error at the first service where I forgot to put new rubber on, only realising after starting the third stage! Fortunately, though it didn’t seem to affect things too much. That aside it was a clean event for me with a nice rhythm throughout; somehow escaping with fewer mistakes on the rally than I had done in testing over the route. Now to focus on the Spanish stages and looking at how to properly drive the R2 Fiesta on fast smooth tarmac roads.”

While Hirst used a steering wheel and pedals, the fastest driver using a controller was Northern Irishman Philip White who finished 26th overall.

British Rally Championship stars also took to the competition as they could compete against their fellow licence holders and fans of the sport. Welshman James Williams was quickest of the blocks as he threw the R2 car around the virtual world to finish seventh overall while defending champion Matt Edwards, WRC2 star Rhys Yates and double-champion Jonny Milner finished 32nd, 43rd and 66th respectively.

“It was great to see so many of our Motorsport UK members taking part in the competition,” said BRC Championship Manager Iain Campbell. “We had so many people messaging us, relaying their mixed fortunes – but universally they all said how much fun it was and how nervous they got during their timed runs. Some even said it was harder than the real thing. We have had a real positive reaction to this and the Invitational event and it is good to get the buzz of competition whilst we Stay at Home. The second round will be open shortly and we look forward to switching to the Tarmac where we might see a different driving style come to the forefront.”

The second round of the series will get underway on the 25th May with the smooth, fast and flowing stages of Spain the next challenge on the eBRC calendar. Competitors can take part in the series by joining HERE. The closing date for entries into round two will be the 28th May at Midnight. 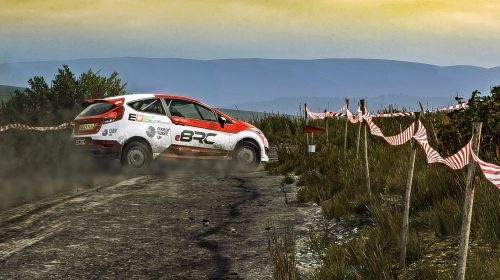