Matt Edwards and Will Rogers will step into BRC1 for the remainder of the MSA British Rally Championship season before a season long campaign in the Ford Fiesta R5 backed by the Swift Group. The BRC2 Champions will tackle the final two rounds of Britain’s premier rallying series in the M-Sport prepared machine.

Swift Group has had a long and illustrious association with the world of rallying, Chairman Peter Smith competed for many years in a variety of rally championships, with his son and fellow Swift Group board member Guy inheriting Peter’s passion, successfully forging a career as a professional racing driver.

In recent years, Swift Group has supported a number of promising and established drivers including Matt Edwards, Ashley Slights and Julian Reynolds.

For 2017, Swift Group will continue their sponsorship of Matt Edwards and his co-driver Will Rogers as they move up into the BRC1 class. From the early stages of his career, Matt has impressed with his speed and skill winning his first championship class in 2007.

Swift Group first sponsored Matt in 2010 just after he had teamed up with co-driver Will Rogers. Swift support has continued since and for the current season Matt has been competing in a self-built Mitsubishi Evo in which he secured the BRC Class 2 championship with two events remaining.
At the Carlisle Rally this June, Matt was offered the opportunity to compete in an M-Sport Ford Fiesta R5. Despite having only driven the R5 for 20 miles before the rally, Matt set a blistering pace only to be undone by a puncture.

M-Sport’s globally successful Ford Fiesta R5 received an extensive upgrade this year that brought substantial performance enhancements to what is already a championship-winning vehicle. Since its debut in the middle of 2013, the Fiesta R5 has become M-Sport’s most successful global rally car. With more than 170 cars competing around the globe, the Fiesta can boast hundreds of class victories alongside outright wins and championship laurels.

‘It has been tremendous to see Matt develop as a rally driver and I am thrilled that Swift Group has decided to support his step up into the top class of the British Rally Championship’ said Peter Smith, Swift Group Chairman.

Matt Edwards commented ‘The opportunity to compete in the 2017 BRC Championship in an R5 is a dream come true and allows me to test myself against the best rally drivers in Britain. I am especially pleased to be continuing my relationship with the Swift Group who has been a fantastic sponsor over the last few years.

‘M-Sport is very much looking forward to helping support Swift Group’, Matt and Will on their goal to compete in the top flight of the British Rally Championship in 2017’, said John Steele, M-Sport Commercial Director. ‘With an overall Class Championship achieved already this season there is no denying Matt has the potential to deliver next season. The Fiesta R5 will be the perfect car for the campaign – currently leading the 2016 BRC championship – and a proven global winner since it first hit the stages. We wish the team the best of luck’. 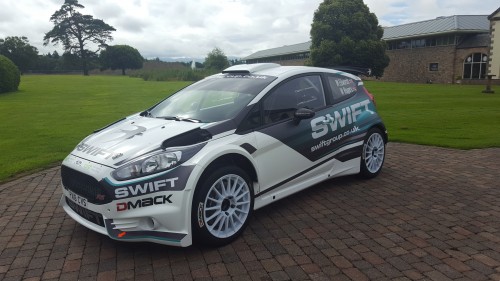