Northern Irishman Jonny Greer will return to the Prestone British Rally Championship in 2017 with his Citroen DS3 R5. The Ulsterman came third in the overall standings last year and will be hoping for more of the same this year with Kirsty Riddick sat alongside.

Greer finished an impressive third overall in the French pocket-rocket last year with stunning pace on his preferred Tarmac surface and consistent results on the loose to put together a near perfect campaign. Jonny returns wanting more in 2017.

“We want to try and build on last year but there is yet another strong entry so it will be difficult to judge where we will be. We put a lot of work into the DS3 last year and I think it paid off as we have made progress with every event entered. There are a lot of new packages and teams this year so we hope the consistency and sticking with the Citroen will be of a benefit to us.”

As an Ulsterman, Greer’s natural favourite event would be the Ulster Rally, but the man from Belfast is eager to contest all of the rounds this year.

“The Ulster for sure has to be my favourite as competing on home soil is great. The change of location and new stages were brilliant last year so I am looking forward to getting into them this year. Ypres will be another highlight as we did the event in 2011 in a Skoda Fabia S2000 and really enjoyed it.”

The Tarmac ace also punched in some impressive times on the gravel and the Northern Irishman is eager to progress in 2017.

“Tarmac is my favourite surface but I really do enjoy the gravel and for me this year it is all about improving my gravel form and become consistent in my driving to be challenging towards the front. The BRC is a series I had to come back to as the quality of events and level of competition is fantastic and with the Irish series, these are two championships I wanted to do without spending a huge amount of money to do the European or World series’.” 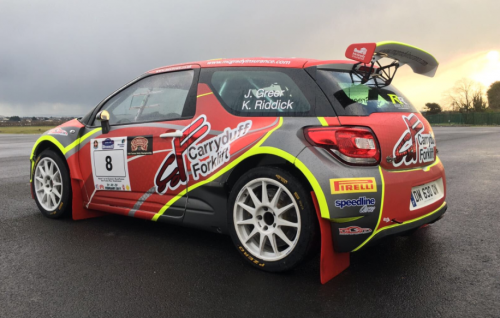