Irish star Desi Henry currently sits eighth in the overall standings after three dramatic MSA British Rally Championship rounds. Henry, who is piloting one of three Skoda Fabia R5’s in Britain’s premier rallying series this season, has shown flashes of brilliance in the opening three contests as he gets to grips with his new mount for the 2016 season.

“We went with the Skoda Fabia R5 at the start of the year after running the S2000 spec car previously,” explained Henry. “The car ran faultlessly and was well developed as it handled well and suited my style. – Naturally it was the step to take and stay with the brand for when the R5 cars took over. Better the devil you know!”

The Irish star, like a few of his fellow countryman, elected to run in two championships which adapted to R5 regulations at the start of the year. It has certainly been a baptism of fire – as he has had to balance the highs with the lows that have been thrown at him so far this campaign.

“We have had a mixed season. We started both the Irish and British series and it started so well in Galway as we were lying third before rolling out of the rally. We have elected to continue and commit fully to the BRC after greater progress in that championship. We had punctures on Mid Wales and the Pirelli which really effected our results as our punctures seemed to always be at the start of the stage making us lose so much time.”

Problems aside, Desi’s pace has been unquestionable with the Fabia driver being the closest to Elfyn Evans on the Circuit of Ireland. Had it not been for a wheel bearing shattering, Henry would have inherited the BRC rally lead.

“We have shown that we have the speed to be competing at the sharp end. Ok we are not near [Fredrik] Ahlin and [Elfyn]Evans as they have so much more experience in R5 cars but we are close to the next group, who are knocking on the podium positions.”

In the mid-season break, Henry has been testing and refining his Czech machine ahead of the Scottish Rally later this month.

“I am a lot happier with the set-up and we took the Moonraker Rally win which forms part of the Irish Forest Rally Championship. This has given my a lot of confidence and we hope to put it all into practice on the Carlisle Stages this weekend which will help us dial in the Fabia even further. I think we will be in a strong position heading to the Scottish Rally.

“Realistically we are always going to be on the back foot against drivers with WRC experience. We want to be competing in the top five and challenging for a top three result as I think the car is a lot to my liking now as I am getting used to everything and in a better position heading into the second half of the year.

“I am looking forward to the series coming back to Ireland as I can’t wait for the Ulster. There are new stages which will be a challenge for everyone. I love the Tarmac, it’s what I grew up on and think we will be even more competitive in the final two rounds.” 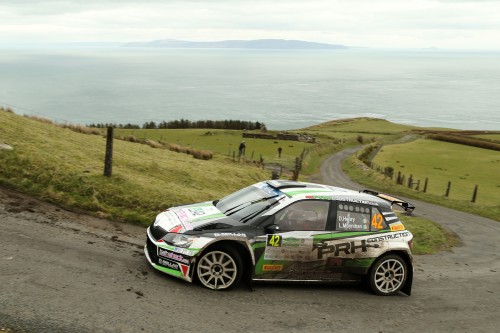