Welshman James Morgan remains untouchable in the PCSpecialist BRC Esports Invitational series, as he claimed his third-straight win in the online challenge on DiRT Rally 2.0 by Codemasters. Morgan enjoyed an event long battle with Scotsman Richard Crozier and Northern Irishman Josh McErlean on the four stages of Germany with the Aberdare co-driver taking the win by a mere 4.0 seconds from McErlean.

Britain’s premier rallying series’ virtual championship, also supported by AMD is providing a competitive fix for the top competitors and pulsating visual entertainment for rally fans around the world, with over 120,000 people tuning into the last round in Spain.

Last time out in Spain, James Williams led early on, but went off the road on the second stage, handing the control to Morgan – who kept his cool, calm and consistent approach to back-up his round one win in Wales. Williams fought back into second while Josh McErlean rounded out the rostrum.

Germany was now to be the latest challenge for the crews, with the mixed conditions playing havoc with tyre choices for the four-stage shoot-out. Quickest out of the blocks was McErlean. The 2019 Junior BRC Champion had his set-up dialled in on the opening dry stage, while James Morgan was the one who read the grip the best in the second stage as he marched into the overnight lead on Tuesday evening by just 0.9 seconds from McErlean.

On the final day, a similar weather pattern would again see a dry stage, followed by a wet test. Richard Crozier who was lying third, took a gamble, as he elected for slicks for the two stages. It paid off, as he produced a stunning drive to leap-frog Morgan into the rally lead. Meanwhile a fast-paced pack of Morgan, McErlean, Williams, Dale Furniss and double British Champion Matt Edwards jostled for position, as they went into the final stage with a mathematical chance of clinching the win.

As the heavens opened for the final time, Crozier had nearly signed and sealed the win as he gingerly kept his car on the road with the dry tyres on the wet road. However, drama struck as the Scotsman put the car off the road in the final sector, losing over 20 seconds and dropping him down to sixth in the final standings. The ever-present Morgan was there again to pounce and punched in another fastest stage time to win his third-straight event.

McErlean bagged himself his third podium on the bounce in second, while Dale Furniss took his best result so far in the series to complete the rostrum. James Williams missed out on the podium by two tenths of a second but can be pleased with another haul of points in fourth, while defending British Rally Champion Matt Edwards completed the top five.

For those who missed the action from the third round can watch it back on the British Rally Championship Facebook page and Motorsport UK YouTube channel. Those wanting to upgrade their own gaming set-up can do so by visiting pcspecialist.co.uk  and using the discount code: EBRC

Round Three Winner: James Morgan said:
“What an event that was! I do love the German stages and the weather really made us all work for it! It was very close between us all and I know everyone had upped their game again from Spain. I can’t believe I have taken another win, and what drama on the final stage! Richard [Crozier] made a blinder of a tyre choice on the penultimate stage and I made a few small mistakes and I thought, that’s it – second possibly – I am happy with that, but after a good push and knowing I was on the wet tyres for the rain, I had half a chance. A hat-trick is quite incredible, but the championship isn’t over yet, as I need a few more points to win the series but also I would really like to do the clean-sweep and take the win in Scotland!”

Motorsport UK eBRC
Members of the public can take part in the Motorsport UK eBRC – the first ever British Esports Championship to be affiliated with the governing body for British motorsport. Open to members of Motorsport UK, the four-round series follows the Invitational events – using the same stages and same weather conditions. Every driver will use the Ford Fiesta R2T in the game and the winner will be crowned a British Champion and will receive a test in a real-life version of the car – courtesy of front-running BRC team, EDSL Sport.

Registrations are still open with the deadline for the third round Midnight on Thursday 18 June. All registrations after this date will join the series from round four.

BRC Championship Manager Iain Campbell said:
“Congratulations to James Morgan once again – we are running out of things to say about him now! Sadly, we had to cancel the 2020 British Championship, but this online PCSpecialist BRC Esports series has really taken off and been great for our competitors to renew rivalries, but also to have thousands of people watching around the world is exciting to see, as we take the BRC to new audiences.

“We can’t wait for the final round and we can’t wait to see which member of the public wins the Motorsport UK eBRC contest at the end of this week. Running alongside the Invitational series, we are getting close to crowning a new eBRC Champion and putting them into a real rally car. If you haven’t done so already, register and take part. It’s great fun! 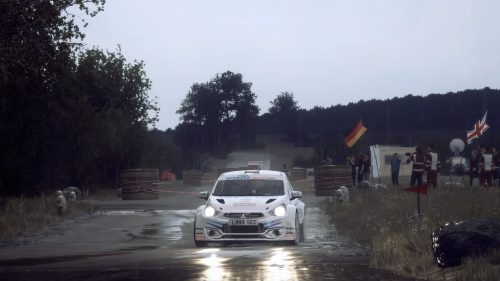