The team from Harper Adams University were a welcome addition to the Prestone MSA British Rally Championship last season with their striking Ford Fiesta R2N in the Cadet Cup.

The enthusiastic team, led by driver James McDiarmid and co-driver Max Haines-Messenger, picked up several class podiums and a dramatic breakthrough win at the season finale – Rally Isle of Man. We spoke to James about the University’s first season in Britain’s premier rally series.

“It was really difficult,” explained McDiarmid. “ We had only driven the R2N on the road before we left for the first round and the paint was only touch dry!

“It was brilliant to claim third – it was certainly more than we expected. Our aim throughout 2017 was to just finish every round – that was all. Success followed and we had great result after great result right up to the Isle of Man where we were first in class. To win the class on the Manx was just awesome it was a cloud nine moment for the whole team – a bunch of students!”

It wasn’t just their on stage heroics that won the hearts of BRC fans and followers, it was in the service park where they felt most gain was made.

“We had no pressure for results and I think that helped us focus on preparation and professionalism. We wanted to improve with every round and it was really nice to be approached by other people asking us to run their cars. That was very special and we all thought that we have done something quite cool here.”

A new year comes areound and new challenges present themselves in 2018. Co-driver Haines-Messenger has graduated from the university into the big wide world and in his place comes Gareth Clarke and a new animal is born with the R2T now in the Harper Adams fold.

“We came back after Wales Rally GB at the end of the last year and we had a debrief to find out what we could do for 2018. We thought about BTRDA, Cadets again and all the other options we could do.

“We made a list of the things we enjoyed the most and top of that list was Belgium –everybody wanted to go back to Ypres and that fits in perfectly with the BRC.

“Next, do we want to make the car faster? The answer was yes and we wanted to step it up a gear. We approached M-Sport when our time for renewal came up we asked them if we could go to a R2T. They were completely onboard and Malcolm [Wilson] said he would love to do the BRC with us.” With the green light on the new project, plans were quickly put into action as the team reflected on how far they have come in 12 months.

“We wanted our car at the Autosport Show last year but it was no more than a white shell, which was a shame. We worked really hard to get the car to the show this year to announce our plans and to have the livery designed and applied was a great achievement for us. There were a lot of late nights and our team couldn’t see their other halves but we were lucky to have understanding cold shoulders!” With the project well advanced and peace made with significant others, the focus switched to James’ own targets for the year. With his first season of rallying under his belt, McDiarmid is keen to push on in 2018.

“Last year was my first full year of rallying. We got a lot of the basics right – our car was always immaculate, our servicing went well and now we want a year to focus on performance. What level that will be, I don’t know, but so long as we are improving whether that be in driving, team communication, performance in service. We know we can do a championship, we know we can do a year at this level so let’s see how we can do this year.

“We have goals – me personally and as a team. At some point we would like a podium finish, I think that’s definitely a goal for the whole team and something I will be pushing hard for from the off.” 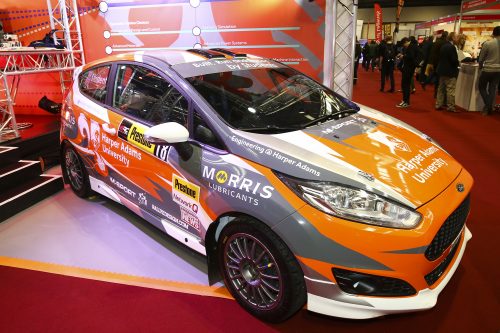