DMACK Junior BRC runner Guy Tyler was the winner of the SORT Oil Spirit of the Rally Award at the Scottish Rally. Tyler was declared the unanimous winner by the BRC team and SORT Oil for his sheer dedication and commitment to the series.

After making the mammoth move from the other side of the world to compete in the series, the young Australian has shown flashes of brilliance so far this season, but luck has not gone his way. On the Mid Wales Stages, the 26-year-old retired following an accident and after missing the Circuit of Ireland, the man from the land down under suffered a gearbox failure on the Pirelli Carlisle Rally.

On the Scottish Rally, Tyler along with co-driver and fellow compatriot Steven Fisher, simply wanted to finish and claim their first BRC points, especially after Tyler nominated to play his ‘Joker’ on the most northerly event on the BRC calendar.

Tyler set the fifth-fastest time from the off and held the position until the end of the flat-out, one-day event, finishing just 4.7 seconds behind Meirion Evans in the junior standings which put him putting him equal tenth in the championship.

“Finally we got a finish on the board and mixed it with the top juniors,” enthused Tyler. “Thank you so much to all those who helped get us here today. To be the last Australian in the series is special, and we want to keep making everyone back home proud as we fly the flag.

“The Fiesta R2 ran great all day apart from a small gear linkage issue. We got stuck in third gear for a stage, but luckily I have experience of that from previous events!

“It is a great honour to win the SORT Oil Spirit of the Rally Award. It means a lot to us. We have the result we wanted and to finally record our first BRC finish with fifth in the junior series is awesome. We look forward to the Nicky Grist Stages now.” 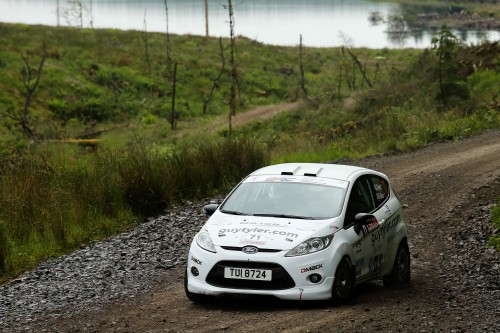