From the bright lights of the World Rally Championship to grass roots domestic series, 2020 looks like being a vintage year for British rallying. David Evans is your guide to the new rally season.

The question was as irresistible as it was largely unanswerable. Elfyn Evans was game enough to give it some thought. A lot of thought. But then he accepted, he just didn’t know. It was the same for the rest of the British World Rally Championship contingent. Nobody knew. No matter, September’s Galloway Hills Rally will deliver the final verdict on the identity of this year’s British Rally Champion.

But it really is going to be that close. There’s no shortage of quality, well-driven R5 (now known as Rally2 in FIA circles) cars on the British rounds. Yes, there was an air of familiarity as Matt Edwards won in his own backyard on the Visit Conwy Cambrian opener, but the Llandudno man knows he’s got his work cut out to make history and become the first driver ever to win the British title three years in a row. Tom Cave, Rhys Yates, Osian Pryce and Ollie Mellors are all looking for a way to spoil his plans to eclipse fellow back-toback BRC winners Colin and Jimmy McRae (Senior did it twice), David Llewellin, Roger Clark, Mark Higgins, Keith Cronin, Bill Bengry, Tony Fisher, Guy Wilks and Johnny Milner.

The calendar for this year’s six-round BRC has also altered significantly from previous years with the Cambrian followed by some of the most entertaining lanes in the world on the Clonakilty Park West Cork Rally (March 14-15). Talking of great lanes, the Corbeau Seats Rally Tendring & Clacton (April 25/26) was one of the big wins from last year, which makes the BRC’s first ever visit to Essex for England’s inaugural closed-road event even more gratifying. From Essex it’s just a short hop across the Channel for what’s fast becoming one of the season’s highlights: the Renties Ypres Rally (June 25-27) as the best of Britain goes toe-to-toe with some of the best drivers in the world. Today’s Ulster Rally (August 21-22) offers familiarity and a second chance for the BRC crews to take on their opposite number in the Irish Tarmac Championship. West Cork and Ulster will provide a two round mini-series within the BRC – and bragging rights as to who’s quickest from either side of the Irish Sea are always hotly fought. The finale takes crews north of the border for the superb gravel roads of south-west Scotland on the Armstrong Galloway Hills (September 19).

Motorsport UK chairman David Richards CBE is perfectly placed to talk about how important the British series is. He won it in 1980 co-driving Ari Vatanen. Richards said: “My [winning] season in the BRC with Ari [Vatanen] was a great confidence-building year. You need proving grounds before you move on to the World Rally Championship and that is the role the BRC plays. The series attracted drivers from all around Europe back then and we are starting to see that again.”

And his driver remains a big fan of the pinnacle of British rallying, with Vatanen fulsome in his praise, saying: “The BRC is a fantastic proving ground for any young driver and I look back at my years in Britain very fondly. The BRC helped to raise the game for Scandinavians and competition in Britain. I am really happy that so many people are enthused about the BRC, the best national rallying series in the world.” Vatanen and Richards did, of course, progress from winning the British title in 1980 to lift rallying’s ultimate prize, the World Rally Championship, 12 months on.

It’s that sort of achievement everybody in this year’s BRC is looking to achieve. But what about the Brits who’ve already made it? Evans is the best place to start. The Welshman won the BRC in 2016, but has been a regular around the WRC for the last seven years. This season though, the former Wales Rally GB winner has switched from M-Sport Ford to Tommi Mäkinen’s Finnish-based Toyota Gazoo Racing squad. And his first impression aboard a Yaris WRC was a pretty good one: Evans led the Monte Carlo Rally for eight of the 16 stages, before eventually finishing third.

There’s no doubt this is the start of a very big season for him and co-driver Scott Martin. With 87 world championship starts behind him, Evans is in a position to take advantage of having arguably the fastest car beneath him and should be a threat for victory on every round of this year’s WRC. Gus Greensmith and Elliott Edmondson are Britain’s other factory WRC crew. The Manchester driver demonstrated his speed on three outings in a Ford Fiesta WRC last season. A podium is Greensmith’s main aim this season and if he can continue to level his learning curve at the speed he has done in the last 12 months, there’s no reason why that’s not a sensible objective. Joining Gus in the M-Sport stable is Rhys Yates, Britain’s only full time WRC 2 runner this season – he dovetails his world championship commitment with a BRC assault in a Ford Fiesta R5.

Yates ran his own Skoda Fabia R5 in last year’s WRC 2 and enjoyed strong results, including a series debut fourth in Monte Carlo. The Chesterfield driver’s pace improved as the season progressed and he starts this season looking to continue that solid progression. Northern Irishman Jon Armstrong makes a popular return to the World Rally Championship.

Armstrong finished the 2016 Drive DMACK Cup in third place, winning a prize drive in a Ford Fiesta R5 on the following year’s Rally Germany – where he showed plenty of pace and potential. More recently, Armstrong has become famous for his victory in the 2018 E Sports WRC, when the Fermanagh man demonstrated perfectly how interchangeable his gaming and realtime stage skills are. Also stepping up to a full JWRC campaign is 20-year-old Ruairi Bell. Bell has shown superb speed and perfect adaptability with his performances in last year’s Peugeot Rally Cup Ibérica as well as the BRC where he won the Ford Fiesta Trophy – scooping €60,000 from M-Sport and Pirelli in the process. The Blackheath driver won his class on his debut at Rally Portugal and was on the class podium at Rally of Spain.

Former European Rally Championship Ladies’ champion Catie Munnings faces the toughest test of her career to date as the 22-year-old starts her first assault on the world championship in the Junior WRC series. That’s the top tiers of the sport sorted for Britain, but what about the other championships? As usual there’s a fabulous array of action out there waiting for you – whether you prefer modern, historic, gravel, asphalt or single-venue events, there’s something for everybody. And, don’t forget, that action’s also broken down into separate national titles, with Wales, England, Northern Ireland and Scotland all offering silverware at the end of the season.

The BTRDA Gold Star is a great place to start with the best woods in Britain covered in seven rapid-fire rounds running in Wales, Scotland, Cumbria, Yorkshire and Shropshire. Stephen Petch made a winning start at the Cambrian Rally and his Ford Fiesta WRC will be an omnipresent force throughout 2020. Four of the BTRDA rounds will double as Motorsport UK English Championship rounds while a similar number do the same in the Welsh Forest calendar. Events like the Nicky Grist Stages (sponsored, as the name suggests, by Colin McRae’s former co-driver’s rally supplies business) and Malcolm Wilson Rally (sponsored, as the name again suggests, by the man who owns M-Sport) are some of the oldest and best supported events in Britain.

They offer tremendous entertainment for spectators with a huge range of cars, from BTRDA Rally First right up through the Gold Star and onto the Historics. If you want diversity, get out on a BTRDA round and watch the complete field pass by – you’ll see a bit of everything. If it’s the next generation you’re after, the Junior BRC is the place to be. This year’s JBRC title offers once again a €60,000 legup towards a Junior WRC campaign for the winner of this all-Fiesta R2T series. William Creighton’s the man to catch after the season opener on the Cambrian.

The JBRC follows all six rounds of the BRC main. Historic-wise, there’s plenty to choose from between the nine-round Motorsport UK British Historic Rally Championship, which includes a mix of asphalt and gravel events, including classics like the Jim Clark Rally. Under the umbrella of the Roger Albert Clark Rally Championships, there’s a mixed-surface and asphalt title up for grabs. There’s also a whole host of Historic Rally Car Register events on offer – and these range from scenic tours to full-bore multi-venue forest rounds. What about the regional association championships? Wherever you are in Britain, you’ll be covered by an association and there will be a series of some sort running locally.

In addition to that, the recent change in roadclosing regulations, which is now devolved away from Westminster to local government and council level, means an increase in the number of closed-road events starting. Make sure you get out and support these when and where you can – plenty of blood, sweat and tears have been shed getting this legislation changed. The most famous of all closed-road events in the UK remains one of the most inaccessible, yet forever the most popular. The Beatson’s Building Supplies Mull Rally goes from strength the strength. Last year this all-asphalt two-dayer on an island off the west coast of Scotland broke the internet as it filled its 150car entry in a website-hammering 53 minutes. Whether you’re following the Brits around the world or taking on Owen Motor Club’s annual Weston Park outing, the AGBO Rally, there’s no shortage of rally action week in, week out. Get out there and enjoy it. 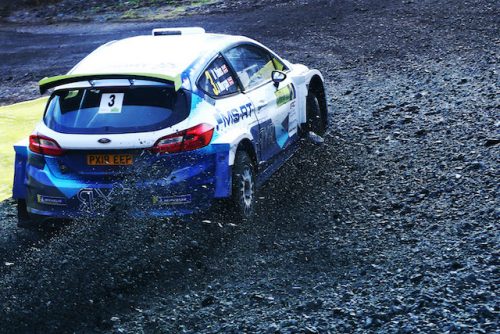