Gallagher steps up to Junior BRC

After a brief foray into the Prestone MSA British Rally Championship in the BRC4 category in 2016, Irishman Marty Gallagher will launch an assault on the Junior BRC this year in his Peugeot 208 R2.

Gallagher with co-driver Dean O’Sullivan, contested BRC4 last year, taking the honours on the Circuit of Ireland and Rally Isle of Man to place second in the class at the end of the season.

“The Junior BRC was something we were considering when we did BRC4 last year,” explained Gallagher. “When the open tyre format came about it made us very interested and the prize at the end of the year sealed the deal for us. The Junior BRC is the only place to be for R2 competition as it showed last year and it’s the only championship that offers great competition on all surfaces.”

The Nicky Grist Stages was the first event outside of Ireland for the Letterkenny star. The Peugeot driver adapted quickly to the gravel stages, leading BRC4 before an off on the second day of the event. A strong run on the Isle of Man and Rally Waldviertel in Austria

cemented a great season in the 208, a machine Marty is hoping will springboard him into the forefront of the Junior BRC.

“We have really got to grips with the Peugeot and feel really comfortable in the car compared to the Fiesta R2 where we really had to overdrive to get any performance out of it.

“The main thing for me is to get used to the gravel and we are doing the first round of the Scottish Championship to help learn further ahead of the Border Counties. I would love to get some wins under the belt and be fighting at the top – hopefully we will be in the hunt at the end of the year.”

Marty is set to line-up alongside the other BRC crews on the Brick & Steel Border Counties Rally on the 17/18 March, the opening round of the 2017 Prestone MSA British Rally Championship. 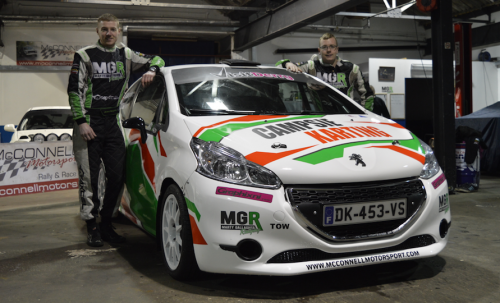