Gallagher was one of five drivers to stand on the top step of the Junior BRC podium last year, when the Peugeot 208 R2 driver clinched the final round of the series on the dramatic Rally Isle of Man. With that winning feeling still fresh in his mind, Gallagher along with co-driver Dean O’Sullivan will be aiming to repeat the success into 2018.

“The BRC was the only place to go,” stated Gallagher. “The competition in the British championship is perhaps the best in Europe and we wanted to be fighting on the best stages once again.”

Marty had a rollercoaster of a season by his high standards as the Donegal-based driver secured three podiums but suffered a cruel retirement on his home event, the Ulster Rally last year.

“2017 started off badly with punctures and things just didn’t go well for us. But by the Nicky Grist Stages in the summer, everything started to click and that’s when I knew we could fight on both the gravel and Tarmac. The win on the Isle of Man was a real confidence boost and we hope to be there or thereabouts in 2018”

Fast forward to 2018 and the young gun is keen to put a mixed season behind him to focus on a full JBRC title tilt.

“Obviously we want to win the championship. That has to be the aim. Having done a season-and-a-half in the BRC, I feel I have a good advantage going into the first round – so long as the bad luck disappears! To be in the same car with Dean [O’Sullivan] alongside will really help. I’m just pleased I haven’t scared him away yet!”

The seven-round series takes in a whistle-stop tour of the British Isles, and the Peugeot driver has his eyes very much on the latter part of the season and has one round on his mind.

“If I had to pick one round, it would be Rally Isle of Man. It was pure class last year. The roads remind me of Donegal and that’s what I grew up on. All of the events will be special and I would like to get to Wales leading the championship or at least fighting for it, going into the decider.” 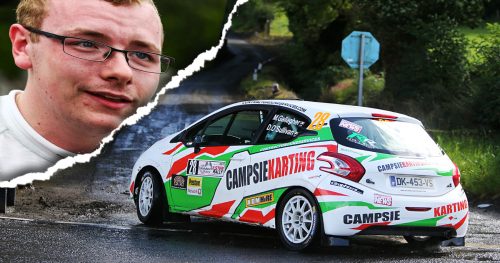