Gallagher going for gold in BRC

Irishman Marty Gallagher is hoping it will be third time lucky in Britain’s premier rallying series this year as he guns for more wins in 2019.

Gallagher returns to the British Rally Championship for a third season in his Peugeot 208 R2. The Letterkenny-ace is rejoined in the car by Dean O’Sullivan and has the package to be fighting right at the very front of the Junior BRC. Last year however didn’t go to plan!

“Last year, where do we start with that! Most of the problems came mechanically and normally from the engine. On the first round of the Irish Forestry Championship the engine blew and we had to get it turned around quite quickly. To send it back to France would be a 12-14 week turnaround – we simply couldn’t do that. So we rebuilt it locally and things were going well until the Pirelli.

“On the recce, there was a corner I didn’t like. I only really put warnings on corners that I fell uncomfortable with and told Dean to mark it. First run was fine but the second, we slid off and into a famous ditch. Ypres was great and happy enough with our showing until a plug melted, halting everything for us. In between Ypres and Ulster the engine went again so we borrowed one from someone else.”

With his title-tilt over, Marty wanted to show his rally-winning pace on his home event, the Ulster Rally.

“We came into our home event with no expectations and just wanted to go for it. On the first stage the brake pedal went straight to the floor. Tor Head shortly after with absolutely no stopping power was bloody scary. We managed to sort that but on stage four or five we thought we are too far down to make an impression at the front so we would at least show our pace. We put it into a hedge sadly and to end the year in the Irish forest championship the engine went again. What did we have to do for luck!”

With 2018 well and truly behind him, Gallagher is ready to show his rostrum potential.

“This year is a new chapter and clean piece of paper. We have a fresh engine from Peugeot and we are ready to go. We have showed we can win rallies previously so that has to be the target. It’s another tough year for competition, but that’s what brings us back. We don’t have a mixed surface championship like the BRC in Ireland. It’s a level playing field for everyone and the events are brilliant. West Cork on St Patrick’s weekend will create a great atmosphere!” 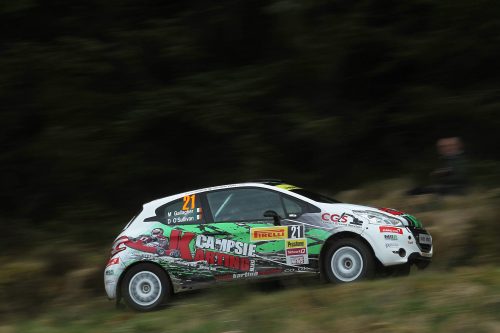