Fredrik Ahlin ahead in Carlisle after day one

Fredrik Ahlin and Torstein Eriksen lead the Pirelli International Rally in their Skoda Fabia R5, after Tom Cave and James Morgan retired their Hyundai i20 R5 from the lead on its BRC debut with suspension damage.

Cave and Morgan got out of the blocks quickly, quickest on the first two stages of the morning, but on SS3 the Hyundai pulled up after a chicane with suspension damage.

That left best-of-the-rest Fredrik Ahlin, the championship leader after winning the BRC-opening Border Counties Rally, to pick up the pieces and hold an overnight lead.

Keith Cronin and Mikie Galvin are third in his M-Sport Fiesta after a steering issue on SS2, while Garry Pearson and Paula Swinscoe sit fourth in their Dom Buckley-run Fiesta, Pearson his first rally since October last year. Marty McCormack/David Moynihan survived a fourth stage puncture to round out the top five.

The Prestone Motorsport News Junior BRC provided its usual drama, with a number of different leaders including a last stage switch in the order.

Callum Devine, in his first rally on his own pacenotes, leads the section in his MH Motorsport Ford Fiesta R2T with Keoith Moriarty calling the notes, while Peugeot 208 R2 driver Meirion Evans/Jonathan Jackson lie 2.2s behind. Fellow Peugeot driver William Creighton/Liam Regan round out the top three and are only 6.7s off the lead.

Donnie MacDonald leads the National Rally Cup class, in his first event for some time in his Mitsubishi Lancer E9 with Andrew Falconer co-driving. He lies 13th overall overnight. John Morrison/Peter Carstairs lie second in their similar Lancer, while Max Utting rounds out the top three in his Ford Fiesta ST on his BRC debut with Mike Ainsworth. 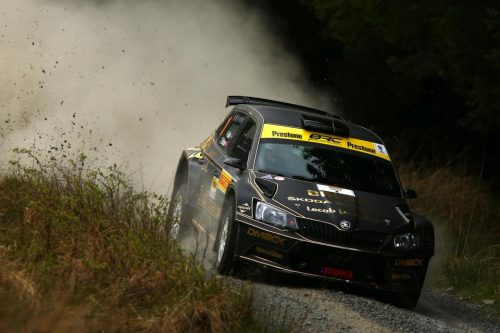