Englishman Fred Field is the latest driver to return to the Prestone MSA British Rally Championship as the Opel ADAM Cup driver signs up to the hotly contested Cadet Cup.

The BRC last saw Field in 2016, when the young gun contested the Ulster and Manx events. Two years on, Fred returns to Britain’s premier rally series to progress his rallying education.

“It’s really good to be back,” enthused Field. “The BRC has everything I think, great rallies using great roads and the competition is of a very high quality and it made sense as a natural progression to learn both surfaces.”

Field has contested just one gravel event in the past few seasons, with the recent Severn Valley Stages becoming his loose surface debut. But on the Tarmac, Field could well be the driver to beat as the ADAM driver contested the Opel Cup in Germany, which he believes has developed him further before his first full season in the BRC in 2018.

“Rallying in Germany was a real eye opener and I think it really helped me progress as a driver. The roads are really unique as the cuts and driving style is similar to Belgium and Ypres. All the cars are the same so you had to do all the hard work yourself to progress. Rally Germany was a great experience as well.”

Despite sampling an R2 Fiesta last weekend, Fred has elected to stick to the ADAM Cup as he believes it will provide the perfect package.

“I know the car inside and out and made sense to continue with it for a third year as there is no point in swapping and changing. I think it will be really competitive against the Fiesta. By knowing the car I can focus on everything else and refine and improve on other areas.

“I will be new to gravel so that will be a big challenge. I have done a test at Sweet Lamb and have done another event to help bring me up to speed. Last weekend was my first ever gravel rally so it was weird going from a mindset of everything is on rails to let it break away and slide.”

As Field sets to build the confidence early in the season on the gravel, the English driver has his eyes set on two rounds he has most experience of later in the championship.

“I did the BRC two years ago and did the Ulster and Isle of Man. On the Ulster, which was only my second closed road event, I can admit I was just driving round safely to bank a finish but on the Isle of Man which I have done for the past two seasons is great fun and felt I could really attack the roads and go for it.”

As for the championship as a whole, Fred keeps his feet on the ground ahead of the 2018 season.

“I think I can be competitive and be right up there in the class. We haven’t spoken about it fully but naturally round wins are always the priority and the bigger picture can be focused upon as the season goes on.” 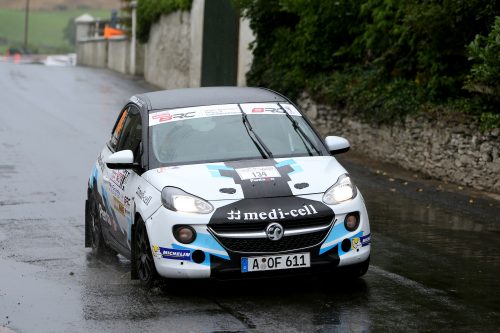