The 2016 Pirelli Carlisle Rally sees the well established Cumbrian event reach a momentous milestone, the rally celebrating forty years of bringing fast and furious motorsport action to the area with a remarkable run of success going right back to 1975 when the rally was first run by a group of local motor clubs and all the signs are that this year could be the most successful yet with a resurgent MSA British rally Championship and the hugely popular Mintex MSA British Historic Rally Championship guaranteeing a bumper entry will be heading to Carlisle where the rally will be based at the giant Borderway mart complex, right alongside, and handy for, the M6 motorway.

2016 also sees a remarkable 25th year that Pirelli Tyres Limited will be the rally’s title sponsor although, Pirelli’s involvement goes way back much further, to 1976 in fact, when after noticing the huge success of the inaugural event, the then manager of Pirelli’s Carlisle factory , Alan Dickinson, a self confessed “Rally Addict”, brought the company on board and the rally became the “Pirelli Tour of Cumbria”. Pirelli’s staff car park was turned into a rally service area while the staff canteen provided lunch for hungry competitors.

Fast forward to 1992 and with the rally invited to join the new format British rally Championship, Pirelli became the event’s major sponsor and the 1st Pirelli International Rally was won by the legendary Colin McRae, a future World Rally Champion. McRae’s victory was one of no fewer than 16 outright Pirelli wins achieved by Ford cars, although their last victory was in 2005, since then Mitsubishi Evos have enjoyed a run of 6 successive wins, while the last 3 years have seen the Citroen DS3 the car to beat. There may well be a change this year, however, as the British Championship will see a horde of drivers out in the new Fiesta R5 car while other top drivers return to the series in a variety of cars with Skoda Proton, Peugeot and Vauxhall all entering the series.

It all adds up to a mouth watering prospect for rally enthusiasts and this very special Pirelli Carlisle Rally, which runs over the weekend of 30th April/ 1st May, looks set to continue the success story that the Pirelli backed event has become ….. hopefully for another 40 years. 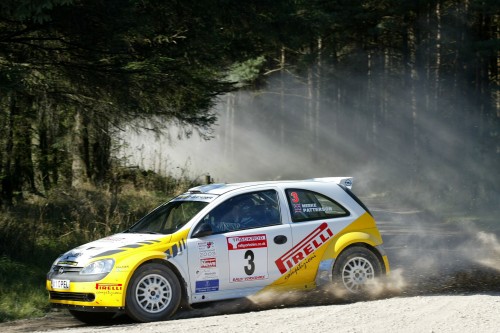