Fortune favours the brave as BRC speeds into Kielder Forest

The action-packed British Rally Championship heads to Carlisle, Cumbria for the Pirelli International Rally (27 April) – the third round of the series.

This weekend the intrepid British championship crews face a one-day shoot out over 80 fast and furious gravel miles in the infamous Kielder Forest complex. Eight timed stages on the fast and flowing gravel roads await before a family-friendly finish in the centre of Brampton where fans will be able to get up close to the cars and stars.

Leading the charge in Britain’s premier rallying series is reigining champion and 2018 Pirelli International winner Matt Edwards and co-driver Patrick Walsh. Edwards clinched his breakthrough BRC win on the gravel of Kielder exactly one year ago and will be keen to repeat the feat this weekend. The Welsh pairing are spearheading the assault for Cockermouth-based team M-Sport once again this season and the Pirelli-backed Ford Fiesta R5 duo will be eager to extend their championship lead and back up their round one Cambrian Rally win.

“Winning the event last year was a big thing for me. It was a great battle with many top drivers, but the most important thing was that it was an uneventful weekend as we had no dramas compared to other crews. It was an important rally as it was my first International and first BRC win and I look forward to returning with the number one on the door – something I have yet to do on a BRC round, so that will be another nice tick in the box.

“The event is very unique. You need a lot of bravery over the crests and on the high-speed straights to really make up time. You need to also have an element of caution as Kielder can bite and catch you out. Your pacenotes are vital as that can give you more confidence over a blind crest or if it’s wrong it could put you in one of the famous ditches. Kielder is not known for allowing mistakes so it’s very much a tightrope between a stage win or retirement.”

Tom Cave chalked up his first four-wheel-drive BRC win last time out on the West Cork Rally after an intense final stage-shoot out with Edwards. Cave took the first win for Hyundai in the BRC since David Higgins in 2004 and the i20 R5 pilot will be hoping to continue the momentum onto the gravel in Kielder. Joined in the Michelin-shod Hyundai by Dale Bowen once again – a win in England will turbo-charge their title aspirations.

2011 British Champion David Bogie will be looking to make strides this weekend as he searches his first win of the season. Bogie from Dumfries and Irish co-driver John Rowan lead the charge for Carlisle-based preparation firm CA1 Sport on the rally and the pair will be keen to put the 2018 early exit behind them and stand on the top step of the podium.

Second in the points standings coming into the Cumbrian round is Marty McCormack and Barney Mitchell in their Skoda Fabia R5. The Irish pair have been chipping away this season and have a third and a fourth in the bank already – but the pair would so desperately love to take their first BRC win on the fast Kielder forestry tracks and make it three different winners in as many events.

Fellow Irishman Desi Henry is a previous Irish Forest Champion and with the experienced Liam Moynihan sat alongside – the Skoda Fabia R5 pairing will be hoping a rostrum will propel them up the championship order.

Rhys Yates is making a welcome return to Britain’s top flight on the Pirelli Rally. Yates will be dovetailing selected British events this season with his FIA World Rally Championship outings. The Englishman has fine form on the Cumbrian gravel as the young-gun fought for victory 12 months ago. Fast forward to 2019 and this time round he will be looking to go one better than his second-place last season.

The Junior BRC for drivers under 26 years of age in front-wheel-drive R2 cars also creates drama aplenty on the BRC stages. So far this season the exciting formula has seen two first time winners and five different drivers on the two podiums so far this season.

Josh McErlean broke his victory duck on the West Cork Rally in his Peugeot 208 R2 and scooped £2,500 – the first prize from Peugeot UK and Total. The Northern Irishman has been impressive so far this season in the French machine and would love to do his own double – but he will be pushed hard this weekend by a hungry chasing pack.

James Wilson won the opening round of the championship in Wales and joint leads the series with McErlean coming to the Pirelli. The Peugeot driver impressed on the gravel last season when he made his BRC debut and along with 2014 BRC Champion co-driver Arthur Kierans the Irish pair will be hunting another podium to keep up their impressive form.

Mister consistent William Creighton hasn’t been off the podium so far this year and comes into the Pirelli full of optimism with co-driver Liam Regan. The 208 seems to be the car to have this season and the 2017 JBRC Pirelli International winner will be looking to get back to winning ways to springboard him above his Irish rivals.

James Williams occupies fourth in the standings and is best of the rest in his Vauxhall ADAM R2. Along with co-driver Tom Woodburn, the Welsh driver returned to the rostrum in Cork and will be fighting for his first Pirelli win in his quest to become champion this season.

New for 2019 is the career-changing prize of €60,000 from M-Sport and Pirelli to the first Ford Fiesta R2 driver in the Junior BRC standings. Leading the Fiesta brigade is Ruairi Bell – who is in his first BRC season. Bell has been building confidence and pace in the brand-new 2019-spec Fiesta and he rounds out the top five in the standings. Bell will be searching another top five or even a podium and he has an ace up his sleeve this season as the Englishman has 2018 BRC co-drivers champion Darren Garrod alongside guiding him through the challenges that await.

Keep up to date with all things BRC by visiting www.britishrallychampionship.co.uk and the Pirelli Rally www.pirellirallychampiosnhip.co.uk. 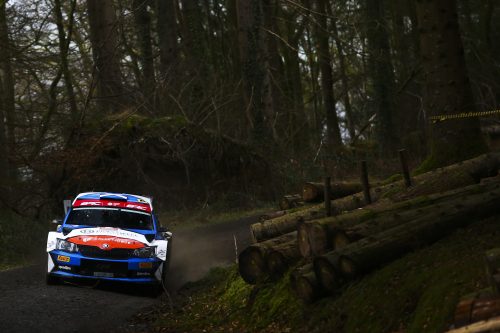