Foot in both camps

Liam Regan, co-driver to William Creighton in the Junior BRC is one of few Prestone MSA British Rally Championship stars to have experience in both seats in a rally car. We talk to the Irishman about his rallying debut and how the relationship started with Creighton.

“I first started driving back in 2006 and soon after I won the Northern Ireland two-wheel-drive clubman championship in a Vauxhall Nova. After that I went into the Fiesta Sport Trophy which was a really competitive championship. I was up against the likes of Elfyn Evans and Alastair Fisher and it was in that period I learnt a lot from the excellent co-drivers that sat with me. The likes of Andrew Roughead, Neil Dashfield and Francis Regan really helped me as a young driver, which I suppose is why I went into co-driving – to give something back and help the next generation.”

After finishing in the championship top three in the one-make Fiesta series, Regan stepped away from a full on rallying calendar to embark on a new chapter, with selected events with David Greer Motorsport.

“In 2009 the credit crunch hit and during that time I got to work with DGM, the team that currently run William Creighton and Jonny Greer in the BRC. They were building a four-wheel-drive Peugeot 206 Evo which was a fantastic car and ahead of its time and I drove that on half a dozen events.”

With Liam enjoying his time behind the wheel of the 206 thoroughbred, a Mitsubishi Evo 9 Group N also entered into Regan’s stable. When time allows, The Irish driver enjoys nothing more than hurling the Japanese machine through the Irish forests and it was during his stints in the Evo that led him into switching to the other side of a rally car.

“Brendan Crealey helped me a lot with the Mitsubishi and from that he approached me about navigating for his son Ben. I had no intention of ever co-driving but I saw Ben had talent and wanted to help in anyway I could. In 2012 we became Irish Junior 1000 champions but soon after, rallying for Ben took a back step as exams and schoolwork was the priority and that’s when William and his Dad got in touch. I said I would do it for a year to help them get up and running and I never thought I would continue for another four years! On single venue events, I knew what I was doing but when the R2 Peugeot came along I knew I had to sharpen myself up! Kirsty Riddick has been brilliant and she is incredibly helpful even now giving me tips and showing me things to look out for.”

With several years under the belt in both camps, Liam paused before answering the next question. Which seat do you prefer?

“I really enjoy both but there is no substitute for driving. I have always enjoyed watching the Group N cars on rallies and to have one myself now is so much fun. I do however really get a buzz when William is doing well and to see him come on as a driver. I think what I can bring is that little bit of experience from driving myself as not many co-drivers do both. I have made my mistakes and I hope I can relay them back so William doesn’t do the same silly things.”

On his last event behind the wheel, Regan had 2016 Junior BRC co-drivers champion Ger Conwy sat alongside. A co-driver with a title that Liam is hoping to emulate himself at the end of this season.

“We had a slow start but we got up to speed and to take third to get us going was a good start and to be honest any result would be a disappointment after winning the rally last year. Ahead of Ypres we prepped well but it didn’t go our way. Yes we ended up in a ditch but I wasn’t annoyed or upset as William was giving it everything and so was James Williams and with that high pace, someone was likely to come off. We are up against it for the rest of the year but we just have to take it stage by stage. Yes, there will be some expectation of doing well at home but we will have no advantage as every stage is new for the BRC this year on the Ulster.”

With a varied career in several rally cars, both calling the notes and throwing the gears, Regan was quick to point out his rallying highlights.

“My success as a driver is the joint third in the Fiesta trophy and in the navigators seat it has to be second in JBRC with William last year. That has to be a close second on the list. We took it to some seriously quick and experienced drivers taking it to the best in the JBRC. But if we won it this year I think it could just top everything.” 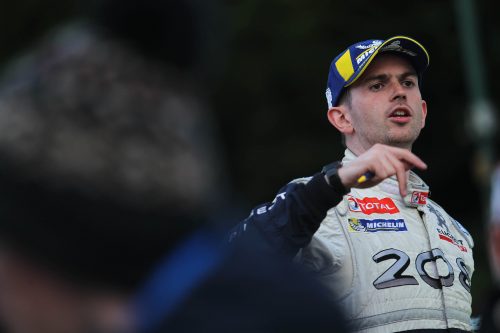