Flying Scotsman steams into the BRC

David Bogie has signalled his intent this evening, as he confirms his return to the British Rally Championship in his Skoda Fabia R5 – a well-proven platform for the Scotsman’s title tilt.

Bogie will be joined in the Czech machine by Irish co-driver John Rowan for a full-on assault on Britain’s premier rallying series. The 2011 champion is gearing up for another battle in the BRC top flight as he goes in search of a second BRC title.

“We were looking at many options for the season ahead, but the BRC gives a good mix of gravel and tarmac stages and the 2019 calendar is very, very good. The trip to Belgium is always a lure, the Cambrian is a great start and the Galloway Hills will be a really good event to end the season on. West Cork is also really appealing as I love rallying in Ireland and the mix of events will create a really good challenge.”

David will contest his fourth season in the BRC and will once again spearhead the CA1 Sport line-up in his Fabia. A strong package for the year ahead? Bogie seems to think so.

“My hopes are the same as they have been the last two years and that is to fight for the championship. The pace is there, we know that for sure but if we can keep it all together and get a good start – we can be right there at the end. Last year the Borders got canceled, I messed up on the Pirelli, the Manx got canceled so I was up against it on the rest. We did get some good results on the other events and if we can carry our pace from Rally GB across to the Cambrian and get a good start, 2019 could be our year.”

Bogie claimed a win on Wales Rally GB last year and was the only man to take the fight to eventual champion Matt Edwards in 2018. But 2019 is a new season with new challenges. What would make the Scottish driver happy on the season curtain raiser?

“A podium naturally would be a solid start and we have to be fighting for the win on several events this year. If the chance of a win is there this weekend, we will throw everything at it.”

A new calendar creates many new challenges. What is the Skoda driver looking forward to?

“Every event stands out and I can’t wait for all of them. Perhaps if it had to be one, it would be the Galloway Hills. It would be brilliant to go into the final round with a chance of fighting for the championship. It’s a rally close to my heart having spectated on it when I was younger and I have competed on the event for so many years. If the season goes our way we will give it everything on that final round showdown.” 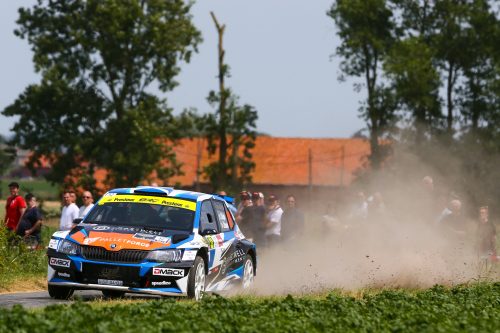